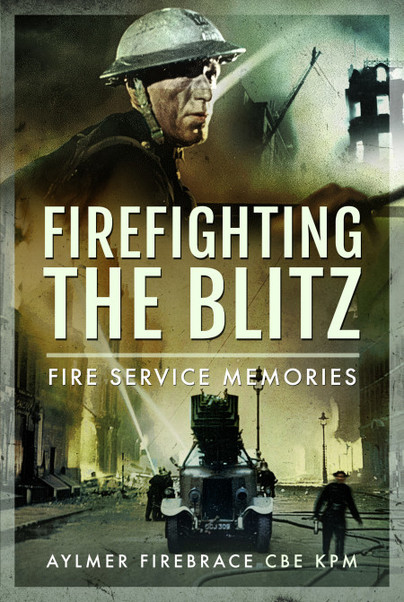 Add to Basket
Add to Wishlist
You'll be £25.00 closer to your next £10.00 credit when you purchase Firefighting the Blitz. What's this?
+£4.50 UK Delivery or free UK delivery if order is over £40
(click here for international delivery rates)

My older cousin was a professional firefighter. He always said that he had grown up to do what every boy dreams of. He started as a volunteer in his home town, served on fire crews in Vietnam, and came back and went to college and then into the fire service for his whole career. After retirement from firefighting he continued to serve as a fire investigator. He has great stories of hiding in the fields to catch barnburners. My cousin would have loved this book.

Sir Alymer Firebrace is writing shortly after WWII directly from his notes. He treats us to an exciting and detailed account of life in the fire services around London up through the war, beginning with an historical account of how the services were organized and how fires were handled under the decentralized system that prevailed before the war and then the run up to the aerial bombardment during the war. His enthusiasm for his work is apparent as he tells of dashing off to observe the most interesting fires while he was supposed to be a manager. It's very important to see with your own eyes, he tells us as he jumps into his car.

If this topic interests you at all you will be thrilled by this book. It is very well written by a man who was trained for his leadership role in the old military system where clear and concise writing was expected of officers. The memoir is generous, humorous, and full of the most interesting details of a world very unlike ours today.

Learn the history of 20th century firefighting from the man who led England's emergency response to the Blitz. Firebrace (an aptonym if ever I've heard one) combines anecdote and high-level strategy in a book that is simultaneously entertaining, thought provoking, and informative.

Sir Aylmer Firebrace's tales of firefighting in the old days was truly fascinating with his vivid and evocative descriptions, although some of the book was a bit technical. I especially liked the stories of the horses-some of them were so well-trained that they thought of each other's welfare and they sounded lovely, although it was a hard job for them, of course. It was also filled with hair-raising accounts of fires in warehouses, planes and boats, and what firemen had to do to put them out. The bravery of these early firefighters was just staggering. I would like to read more about this.

Wow! Mr. Firebrace has led a very interesting life. His book is a window into a world that is captivating. I found myself unable to stop reading at night. Very few people can tell such a story with such vivid descriptions. I would recommend this book for anyone who enjoys history and the beginnings of firefighting in England.