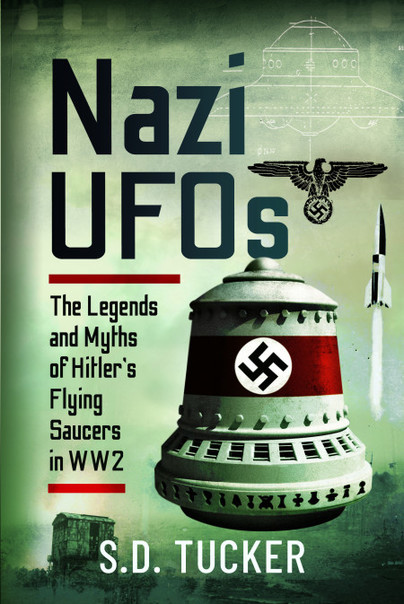 The Legends and Myths of Hitler’s Flying Saucers in WW2

Preorder
Add to Wishlist
You'll be £20.00 closer to your next £10.00 credit when you purchase Nazi UFOs. What's this?
+£4.50 UK Delivery or free UK delivery if order is over £35
(click here for international delivery rates)

Nazi UFOs tells the strange tale of how, following the first alleged flying saucer sightings made in the USA in 1947, a series of fantasists and neo-fascists came forward to create a media myth that the Nazis may have invented these incredible craft as a means for winning the Second World War, a plan which was tantalisingly close to completion before the Allies conquered Berlin in 1945.

Today, the fantasy of Nazi UFOs has grown into an entire mythology in books, on TV and online. Did Germany back-engineer anti-gravity craft, and even a full-blown time-machine, by stripping technology from a crashed alien saucer? Did the SS secretly invent ‘Green’ technology for use in their star ship engines, and was this planet-saving discovery later suppressed at the behest of a sinister Big Oil conspiracy? Did Himmler try to develop ‘lightning weapons’ for use in aerial combat?

By contrasting the fake military-industrial pseudo-histories of Nazi UFO theorists with details of real-life Nazi aerospace achievements, the author demonstrates both how this modern-day mythology came about and how it cannot possibly be more than fractionally true. For the first time, this fake ‘alternative military history’ is laid out in full.

This book features an appealing cast of con-men and spies, complete madmen, real-life Nazis and completely made-up ones, operating right across the globe from South America to wartime Europe and Japan. A good example may be the ‘mad professor’, Viktor Schauberger, who actually genuinely did manage to gain a personal audience with Adolf Hitler in order to try and convince him that he had discovered and then exploited some amazing new source of natural ‘free energy’ which could make objects (such as saucers, in the opinion of some) float. Hitler dismissed his plan, but it does nonetheless show how close some bizarre schemes came to being implemented in Nazi Germany.

S.D. TUCKER is a much-published British author who has written numerous well-received books and magazine articles for publication in the UK, US and Ireland, with a long-standing focus on the more unusual areas of history. Writing about topics as varied as weird science, aberrant economics, historical eccentrics, medical quackery and strange ideas about outer space, he has a particular interest in folklore, myth, legend and the paranormal. An experienced and knowledgeable writer on esoteric topics like UFOs, poltergeists and occult Nazi beliefs, which he approaches from a variety of perspectives, he writes the regular ‘Strange Statesmen’ column in Fortean Times magazine.