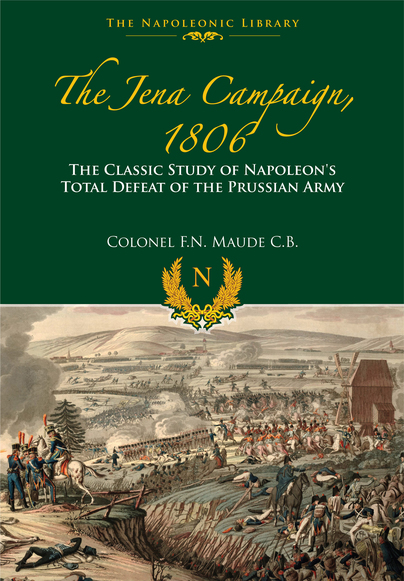 The Classic Study of Napoleon's Defeat of the Prussian Army

This famous study of Napoleon's total defeat of the Prussian Army at the battle of Jena is a monumental panorama of one of history's greatest campaigns and a renowned analysis of the strategy and tactics of the era. In a balanced and gripping narrative of the military events, Maude gives a key insight into the strengths and weaknesses of the two opposing armies as well as relating and analysing every move of the campaign.

This volume is required reading for students of military history, combining the unfolding drama of one of the most mobile wars in history with a thorough and scholarly approach to each significant lesson taught by success as well as by failure.

With diagrams illustrating the combat tactics of the various arms of the opposing forces as well as excellent maps, which allow the twists and turns of a campaign that was fought across the breadth of Germany to be followed with ease, The Jena Campaign, 1806 is a classic of its kind and a vital addition to any Napoleonic library.

First published in 1998 and again in 2015, in this account of the twin battles of Jena and Auerstedt, which took place on the 14th October 1806, the author offers insights into the relative strengths and weaknesses of the two opposing armies – the French led by Napoleon and the Prussians nominally under Frederick William III - as well as providing a thorough examination of the campaign during which the Prussians suffered decisive defeats.

The conflict at Jena was one of two simultaneous battles won by the French on the same day as Napoleon with most of the Grand Armée defeated the Prussian flank guard at Jena while Marshal Davout defeated the main Prussian force further north at Auerstedt. Diagrams and tables illustrate the combat tactics of the opposing forces, as well as their composition, while a selection of nine maps allow the reader to follow the twists and turns of the campaign that was fought across the breadth of Germany. A detailed table of contents precedes the text.