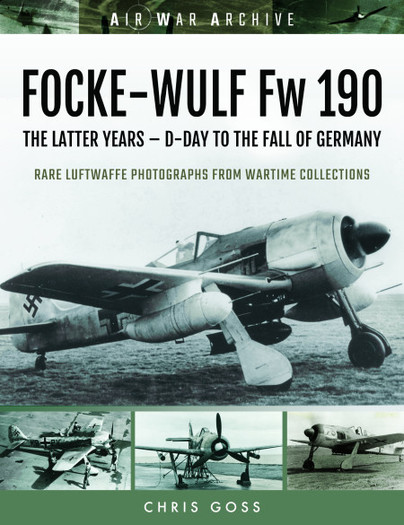 The Latter Years - D-Day to the Fall of Germany

Preorder
Add to Wishlist
You'll be £11.99 closer to your next £10.00 credit when you purchase FOCKE-WULF Fw 190. What's this?
+£4.50 UK Delivery or free UK delivery if order is over £40
(click here for international delivery rates)

Order within the next 2 hours, 43 minutes to get your order processed the next working day!

As the war began to turn against Germany, the Luftwaffe was forced to defend the Reich against increasingly overwhelming numbers of Allied fighters and bombers. The Focke-Wulf Fw 190, together with the Bf 109G, was the mainstay of the Luftwaffe’s Reichsverteidigung (Defence of the Reich) fighter force, both by day and by night.

As the war progressed, the US Eighth Air Force, suffering heavy losses over Germany, changed tactics. The escorting US fighters had been expected to fly alongside the bombers to provide close protection. But this meant that they could not chase after the enemy when in combat, having to return to the bombers. So, from early 1944, the decision was made to free the fighters, allowing them to fly ahead of the bomber stream clearing the skies of German fighters.

To counter this, the Luftwaffe developed the Gefechtsverband, or battle formation, composed of two units of Bf 109s and one Sturmgruppe of Fw 190s. In Gefechtsverband operations, the Bf 109s would engage the Allied fighters, particularly the long-range P-51 Mustangs, leaving the more heavily-armed Fw 190s to attack the bombers. Though the large Gefechtsverband formations were unweildy and not always effective, when they did work well, the powerful and well-armoured Fw 190s wreaked havoc amongst the US bombers.

Meanwhile, on the Eastern Front, the Fw 190 was incresaingly relied upon for fighter and Jabo missions against a dogged Soviet Air Force. With the tide well and truly turned against the Luftwaffe, newer versions of the Fw 190, such as the F and G variants, were intruduced as well as the superlative D-9 which was powered by the Jumo 213 A engine, armed with two MG 131s and two MG 151/20 guns and had a new fuselage and wings.

In this second volume detailing the service of the Fw 190, Chris Goss has assembled photographs, many of which have come from the archive of the late Dr Alfred Price, to illustrate the final years of the type’s war.