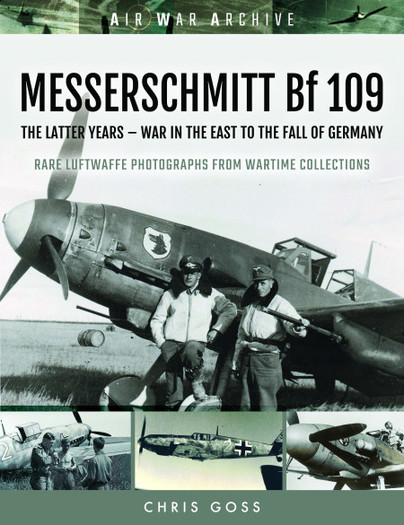 Add to Basket
Add to Wishlist
You'll be £14.99 closer to your next £10.00 credit when you purchase MESSERSCHMITT Bf 109. What's this?
+£4.50 UK Delivery or free UK delivery if order is over £40
(click here for international delivery rates)

The most iconic German aircraft of the Second World War, the Messerschmitt Bf 109 was the Luftwaffe’s principal fighter from 1939 until 1942 when the superior Focke-Wulf Fw 190 came into greater prominence. The Bf 109 served in every theatre of the war, though in this book the author examines the Tip and Run era, D-Day and the Eastern Front.

In the later years of the war, the Bf 109 fought with some success in the defence of Germany against Allied bombers. The Bf 109 was the most produced fighter aircraft in history and more aerial kills were made with this fighter than any other aircraft. Indeed, A total of 105 Bf 109 pilots were each credited with the destruction of 100 or more enemy aircraft; thirteen of these men scored more than 200 kills, while two scored more than 300. The Bf 109 was flown by the three top-scoring fighter aces of the war: Erich Hartmann, the top-scoring fighter pilot of all time claiming 352 victories, Gerhard Barkhorn with 301 victories, and Günther Rall, who claimed 275 victories. All of them flew with JG 52, a unit which exclusively flew the Bf 109 and was credited with over 10,000 victories, chiefly on the Eastern Front.

The Bf 109 was also supplied to several of Germany's allies, including Finland, Hungary, Romania, Bulgaria, Croatia, and Slovakia.

In this selection of unrivalled images collected over many years, the operations of this famous aircraft in the latter part of the Second World War are portrayed and brought to life.

The more technical oriented readers will also appreciate all the details of the airframe, closely visible in the shots. A Recommended book both for modellers and enthusiasts.

The book, like all those in the "Air War Archive" series, is excellent, and Chris Goss is a guarantee of quality. The Bf109 flew to the end in defense of the Reich and on the various fronts of the war, and this book narrates the history of those last tragic years with excellent photographs.

An excellent resource for both the modeller and aviation historian with an interest in the Bf109 and great follow-up to the earlier album. Most of us will find much to enjoy in this book. Highly recommended if this is your area of interest.

A great selection of images of enormous documentary interest.

The 109 was an awesome aircraft and has a unique place in aviation warfare history. This beautiful book will be a great addition to any enthusiast, historian or modeller. The images are inspirational to the modeller and the in-depth history is fascinating. A great publication.

I am happy to recommend this book to anyone interested in the wartime Luftwaffe in general or the Bf 109 in particular, and for its very reasonable asking price, you’ll not be disappointed.

This is another AWA book with a fantastic selection of rare images, covering the latter years of the iconic Bf 109 – Highly Recommended

Aviation historians will enjoy the photo selection and I suspect some re-enactors will enjoy the uniform detail we see at different stages during the war. On top of all that the aircraft modeller will like it in particular, for the variety of camouflage and marking schemes we see, and the detail on some of the airframes. There are also plenty of ideas for dioramas if you use some of the excellent Me109 kits that on the market these days. Another fine addition to the Air War Archive series from Chris Goss and Frontline Books.

If you are looking for inspiration on finishing a Bf 109 or putting a model in a natural setting, then this title is a one stop shop for that inspiration. I know many will say that they can find hundreds of photographs online, but you will be hard pushed to find ones of these qualities that are in natural settings and provided with very informative captions. A great title from this frontline books as part of the Air War Archive.

With a page count of 178 the book represents good value with some decent images reproduced large with comprehensive captions.