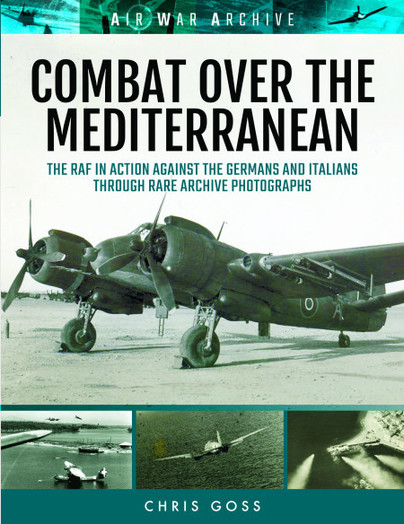 Combat Over the Mediterranean (Paperback)

The RAF In Action Against the Germans and Italians

Add to Basket
Add to Wishlist
You'll be £14.99 closer to your next £10.00 credit when you purchase Combat Over the Mediterranean. What's this?
+£4.50 UK Delivery or free UK delivery if order is over £35
(click here for international delivery rates)

Drawing on an extremely rare collection of photographs taken by the camera guns of Bristol Beaufighters deployed on ground-attack and anti-shipping operations, this book will form a rare indeed unique view of what it was like to fly dangerous strike missions against German and Italian forces over North Africa and the Mediterranean between 1942 and 1945.

Despite being reformed in the UK in November 1940 as Coastal Commands first Beaufighter squadron, 252 Squadron, which also operated Bristol Blenheims until April 1941, was destined to spend most of its service in North Africa and the Mediterranean before being disbanded in Greece in December 1946.

One of the squadrons commanding officers, Wing Commander DOB Butler, DFC, had the foresight to keep perfect examples of the many thousands of gun camera stills taken by the Beaufighter pilots under his command. As a result, he has preserved a remarkable history of the air and sea war in the Mediterranean from October 1942 to May 1945. These dramatic stills show attacks against German and Italian aircraft, Axis warships and merchantmen, harbours and other targets on what are now popular holiday destinations such as Rhodes, Naxos and Kos and across the Greek Islands, the Aegean and Ionian Seas.

This book will be based around these remarkable and spectacular photographs and will include full details of key missions and the crews who participated, with information drawn from Squadron records and combat reports.

These pictures give a really vivid picture of how destructive Allied air power became as the war went on. We see attacks on ships at sea, ships in port, German garrison buildings and even an attempt to find and destroyer a solidary Condor still flying into Greece in 1945, which was hidden from view under olive trees but showed up very clearly in the gun camera pictures! This is a very impressive collection of photographs, made all the more useful by their common source, and by the detailed notes that accompany them.

I was delighted when I got this book with the amazing pictures in my hands. Extremely rare photographic material from RAF's Aegean attacks on Greek seas, taken from aircraft cameras, against German and Italian naval vessels and Italian sailplanes.

Particularly unusual are photographs of attacks on islands and seaside towns of the Ionian and Aegean countries, such as Zakynthos, Meganisi, Kefalonia, Lefkada, Syros, Samos, the ports of Kalamata, Koroni, Katakolos, Preveza, Astakos, Fiskardo, Vonitsa, Gytheion, Sitia and others.

★★★★ This book is a compilation of photographs from one of the former commanders of the RAF's 252 Squadron. The squadron flew Bristol Beaufighters against German and Italian forces in the Mediterranean, predominantly attacking shipping. The majority of the photographs are good quality and the particulars of each mission shown in the book are presented with notes on what is happening in the photos. It's not a complete record of 252 Squadron's service, but it certainly provides a thorough snapshot of what their war was like. Definitely worth picking up if you're a fan of the Beaufighter, or if you just like seeing combat action from a low-level perspective.

The publisher has been producing a number of aviation history series that feature rare archive images. This book is one of those books and has a fine photo content. The photographs in this case mostly show the image from the gunsight, or more accurately gun camera – Highly Recommended.

This is an slightly more unusual collection of archive photos to see from a single unit, and in this quantity. The operational records provide the detail for the individual stories to accompany the photos and I though a useful reminder that these are all very much records of real warfare. Nothing staged and of course real events that would have led to real casualties. A sobering thought perhaps but what a marvellous collection of images all from the one squadron in the same operational theatre which we are lucky to have seen preserved and presented in a way that makes them accessible to us all. Definitely one to recommend.