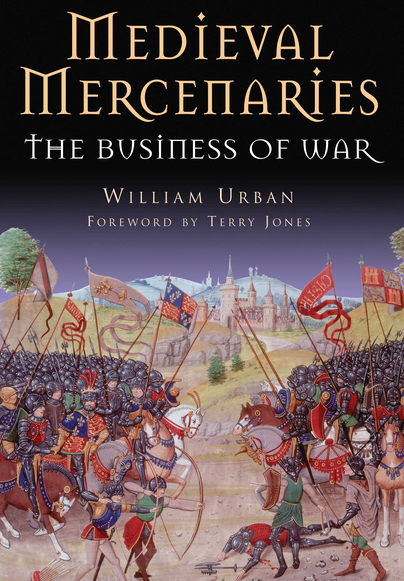 Click here for help on how to download our eBooks
Add to Basket
Add to Wishlist
You'll be £4.99 closer to your next £10.00 credit when you purchase Medieval Mercenaries. What's this?
Need a currency converter? Check XE.com for live rates

The Middle Ages were a turbulent and violent time, when the fate of nations was most often decided on the battlefield, and strength of arms was key to acquiring and maintaining power. Feudal oaths and local militias were more often than not incapable of providing the skilled and disciplined warriors necessary to keep the enemy at bay. It was the mercenary who stepped in to fill the ranks.

A mercenary was a professional soldier who took employment with no concern for the morals or cause of the paymaster. But within these confines we discover a surprising array of men, from the lowest-born foot soldier to the wealthiest aristocrat the occasional clergyman, even. What united them all was a willingness, and often the desire, to fight for their supper.

In this benchmark work, William Urban explores the vital importance of the mercenary to the medieval power-broker, from the Byzantine Varangian Guard to fifteenth-century soldiers of fortune in the Baltic. Through contemporary chronicles and the most up-to-date scholarship, he presents an in-depth portrait of the mercenary across the Middle Ages.

William Urban explores the vital importance of the mercenary to the medieval power-broker, from the Byzantine Varangian Guard to fifteenth-century soldiers of fortune in the Baltic. Through contemporary chronicles and the most up-to-date scholarship, he presents an in-depth portrait of the mercenary across the Middle Ages.

Mercenary armies were a common thing in the Middle Ages and the Renaissance. In this
fascinating book based on contemporary chronicles and the latest research, William Urban tells the tumultuous story of soldiers of fortune at the service of various rulers. swarming anecdotes, the book offers an immersion into the complex and precarious world of professional soldiers
whom war was primarily a matter of profit. It provides many individual portraits of mercenaries
and studies their presence in works of writers as well known as Geoffrey Chaucer or Arthur Conan
Doyle.

In this title, first published in 2006 and now
re-published in paperback format, the author draws on contemporary chronicles and up-to-date research to reveal the tumultuous history of soldiers of fortune in the medieval period. Use is made of anecdotes as the perilous, complex and precarious world of the professional soldier is brought to life, as is the business of war, a subject that the author feels is as relevant today as it has ever been. There are colour and monochrome illustrations, as well as an index.

It is thought provoking in its approach to how our view of the past has been shaped and perhaps the strongest military chapters are off the beaten track for many of us, so may provoke interest. The light style makes this an entertaining, rather than 'worthy but dull', history. Having read it twice now, I think I appreciated it more the second time because I knew what to expect. So, in its paperback incarnation, I think worth getting as an entertaining introduction to the subject.

Written with verve and authority this book
stands out as an easily accessible introduction.

William Urban starts with the professional armies of Rome, tracing the rise of mercenary troops in the tenth and eleventh centuries, until they grew to dominate the battlefield in the Hundred Years War.

Mercenaries are always trapped between the hammer and anvil of victory or defeat. Defeat meant death but victory meant unemployment.

As the readers makes his way through Urban’s fine book, they will realise that the real villains are not the mercenaries, they are only the tool of those who would profit from war. A cursory glance at the news tonight will tell you such people are always with us.

I don’t want to spoil the book for the readers but I have to highlight two particularly great chapters.

The first is ‘Forming The Victorian Imagination: Chaucer’s Knight and Twain’s Saint’, where the author explores the contrast between the knight of Chaucer’s ‘Canterbury Tales’ (where he wisely draws upon Terry Jones’ fine ‘Chaucer’s Knight’). Of Twain Urban writes perceptively that Twain “wrote three ‘historical romances: ‘The Prince and the Pauper’ (1881), A Connecticut Yankee in King Arthur’s Court (1889) and ‘Personal Recollections of Joan of Arc’ (1895). As novels they are either marred (or made readable) by his wry sense of humour. That is, he was a smart alec and proud of it. Most of his comments on medieval society were aimed directly at contemporary counterparts; and he never lacked an opinion on any subject. It is at this cross-section of the humorous and serious that Terry Jones and Mark Twain meet.

Overall, a well-written, well-researched book that deserves a wide audience and would make the basis for a terrific documentary series.