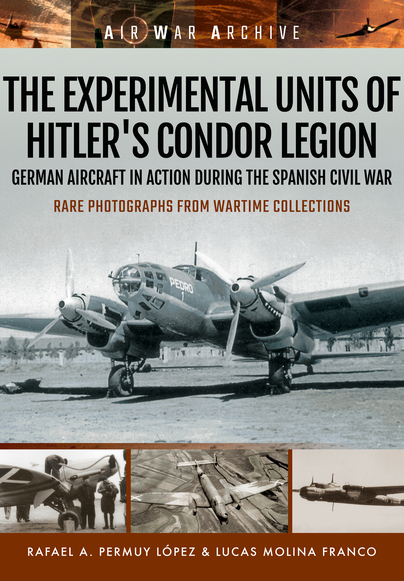 German Aircraft In Action During the Spanish Civil War

Add to Basket
Add to Wishlist
You'll be £8.99 closer to your next £10.00 credit when you purchase The Experimental Units of Hitler's Condor Legion. What's this?
+£4.50 UK Delivery or free UK delivery if order is over £35
(click here for international delivery rates)

At the start of the Spanish Civil War the nationalists sought help for their cause from Germany, following which volunteers from the German Air Force and Army formed what was called the Condor Legion.

This force made a significant contribution to General Franco’s eventual victory and this included two experimental air units, known as VJ/88 and VB/88. The former’s mission was to combat test the new monoplane fighters; the Messerschmitt Bf 109 and the Heinkel He 112. The latter group’s task was to test the new twin-engine, retractable undercarriage bombers; the Heinkel He 111, the fast Dornier Do 17 and the Junkers Ju 86.

The Heinkels made their combat debut on 9 March 1937, when they attacked Republican held airfields in support of the Battle of Guadalajara. The Heinkel proved superior to the two other German medium bombers, being both faster and carrying a heavier bomb load.

Likewise, the Messerschmitt Bf 109 was quickly found to be the better of the two fighters.

This book aims to examine the history of the men and machines that served in those units.

‘The Führer thought the matter over. I urged him to give support [to Franco] under all circumstances, firstly, in order to prevent the further spread of communism in that theatre and, secondly, to test my young Luftwaffe at this opportunity in this or that technical respect.’
Herman Göring at the Nuremberg War Trials.

This is a useful reference work, and tells the story of an early stage in the combat history of these famous German aircraft, but it would have been stronger if Guernica hadn't been side-stepped.

Well researched, well written and containing an excellent selection of historically contemporary photos, I can wholeheartedly recommend this book to anyone interested in the Spanish Civil War (and indeed can recommend the Air War Archive series in general up to date).

The whole work is synthetic and an eight-page color book of profiles completes this interesting study.

An interesting look at the forces which would soon darken the skies of the rest of Europe.

If you have an interest in the Spanish Civil War, or if you wish to understand the development of the Luftwaffe before 1939 this would be a good addition to your library.

A very interesting documentation that helps us to better understand the German performance during the Spanish Civil War.

This addition to the very popular Images of War Series is a special treat for aviation enthusiasts. The Spanish Civil War became an important proving ground for aircraft and armour as part of the German concept of Blitzkrieg. Over-shadowed by WWII, the Condor Legion in the Spanish Civil War has received little coverage – Highly Recommended.

The Experimental Units of Hitler's Condor Legion: German Aircraft in Action During the Spanish Civil War" is the latest in Frontline books' "Air War Archive" series. Written by Rafael A Permuy Lopez and Lucas Molina Franco and translated from the original Spanish this new work features, according to the publisher's blurb, "rare photographs from wartime collections". And to be fair some of them are quite unique. Author Permuy Lopez has already produced several well-received titles on Spanish Civil War aircraft including the 96-page softback "Air war over Spain" produced by Classic, similar in style to this publisher's Jagdwaffe Colours series. Here for Frontline (a Pen and Sword imprint) he concentrates coverage, as the title suggests, on those 'experimental' Luftwaffe types sent to Spain when the Nationalists sought help for their cause from Germany. The Luftwaffe personnel that formed the so-called Condor Legion trialed a number of prototypes and aircraft then undergoing development - VJ/88 had as part of its mission the testing in combat of Germany's new monoplane fighters - the Bf 109 and the He 112 - while VB/88 deployed the Junkers Ju 86, He 111 and the Dornier 17 in combat for the first time. The Do 17 was a state-of-the-art bomber and at the time the 'greatest achievement of the German aeronautical industry', dubbed 'Bacalaos' or 'Codfish' by the Spanish. As the authors point out, while some of these types went on to achieve notoriety during WWII, their combat performance during the Spanish Civil war has at most warranted brief chapters or more usually a cursory overview. While the first twenty nine pages are devoted primarily to the in-theatre deployment of the Me 109's principal fighter rival, the Heinkel He 112, the bulk of the content (pages 29-92) features the bomber types. And while both types are illustrated, the Hs 123 and Ju 87 dive-bombers are not covered in this title. There is a fair amount of interesting text - the activities of VJ/88 are illustrated with extracts from He 112 test pilot Oblt. Otto Winterer's diary describing the first operations of the German fighters ('The He 112's operational debut at Tablada'). At one point he writes "We are fighting against two enemies. Firstly, against the Reds; secondly, and more so, against bad leadership". In 'Loss of a Condor Legion Do 17' a German crew is shot down behind enemy lines during the battle of Brunete to be captured and later exchanged. There are brief combat summaries by unit which do presuppose a certain level of knowledge of the conflict - there is for example a single page devoted to "VB/88's operational debut on the southern Front" in log-book note form and a single page headed "VB/88 in the battle of Guadaljara" or "Operations in Santander: the Battle of Brunete" and so forth. There are no maps though. The bulk of the work is the photo content - mostly clear and well-captioned with some images reproduced over the full page with lots of 'Pedros', 'Pablos' and 'Fumos' (or 'Jumos' as the Ju 86s were dubbed). Similar in style to an 'Osprey', the colour profile centre section certainly looks nice. The He 112 prototypes are illustrated in profile - including Oblt. Harro Harder's swastika-bedecked machine- while the He 111s feature some striking emblems. However there is no colour key so the reader is left to guess - once again - at the upper surface finish of the Bf 109s that saw combat in Spain. To sum up, a title certainly worth adding to the library.

To sum up, a title certainly worth adding to the library.

In the centre section there are some excellent full colour profiles which illustrate the camouflage and markings that will be a great source of inspiration for modellers. Added to these is one page of colour photos showing a preserved Condor Legion uniform along with various badges and insignia. There are some other aircraft pictured throughout the book, but the coverage of the main types mentioned above is certainly the best I have ever seen, especially of the He 112. A good value paperback book, presented in a similar style to the Pen and Sword Images of War series, this is at a good value for money price.

Lucas Molina Franco was born in Ferrol in 1965. He has a graduate degree in Economics and Business Science and a doctorate in Contemporary History. He has worked as a technical officer in the Regional Government of Castile and Leon while teaching as a university lecturer in Macroeconomics and Business Economics. He is currently editor of ARES, a journal of military history and current military affairs.

About Rafael A. Permuy Lpez

Rafael A. Permuy Lpez was born in Ferrol in 1949 and is a reserve Artillery Major. He has a masters degree in Social Communication and a graduate degree in Labour Relations. He has worked as a journalist and column writer for various media in Galicia and for a number of military journals.