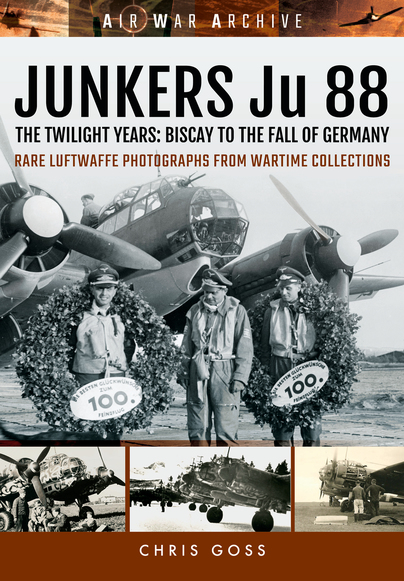 The Twilight Years: Biscay to the Fall of Germany

You'll be £4.99 closer to your next £10.00 credit when you purchase JUNKERS Ju 88. What's this?
Need a currency converter? Check XE.com for live rates

Designed as a fast bomber that could out-run the fighters of the era, the twin-engine Junkers Ju 88 became one of the most versatile aircraft of the Second World War. Such was the success of the design that its production lines operated constantly from 1936 to 1945, with more than 16,000 examples being built in dozens of variants more than any other twin-engine German aircraft of the period.

From an early stage it was intended that it would be used as a conventional light bomber and as a dive-bomber. As such, it served in the invasion of Poland, the Norway campaign, the Blitzkrieg and the invasion of France and the Battle of Britain. This latest volume in Frontlines Air War Archive examines the Ju 88s use in the latter years of the Second World War. The types use as a torpedo bomber or reconnaissance aircraft, as well as its deployment in Russia, over the Bay of Biscay and in the Mediterranean theatre are all explored. Even its use in the Mistel flying-bomb is covered.

In this selection of unrivalled images collected over many years, the operations of this famous aircraft in its twilight years are portrayed and brought to life.

As featured on Aviation Book Reviews

I found the ‘latter years’ section particularly fascinating owing to the unusual camouflage schemes illustrated in the book, and the gun camera shots taken by Allied pilots in combat with the type. The final segment is also eye-catching, as it focuses on the ‘Mistel’ composite aircraft combinations. These linked a small, piloted, fighter (an Fw 190 or Bf 109) mounted above an unmanned Ju 88 laden with explosives, the latter being used as a ‘flying bomb’. Previously unpublished photographs on the subject rarely surface these days, so Chris has done extremely well to find so many. Overall, this well produced book has plenty to offer and would be a worthy addition to any collection.

What makes this book stand out is the quality and rarity of the photographs. This is not an area of military history that I claim to know much about, so I found it both interesting and moving looking through the photographs the author has included... In conclusion, the main focus of this book are the photographs, and rightly so. They are superb and well-presented by the publishers. A welcome addition to my library, and highly recommended to anyone interested in this aircraft, or the air campaigns in the Second World War in general.

Another one easy to recommend for Luftwaffe historians as well as modellers. A host of fascinating archive images, all with helpful captioning to give individual detail. Modellers I think will like this one for the detail that is shown in the photos and the large number of pictures which can inspire some great diorama ideas.