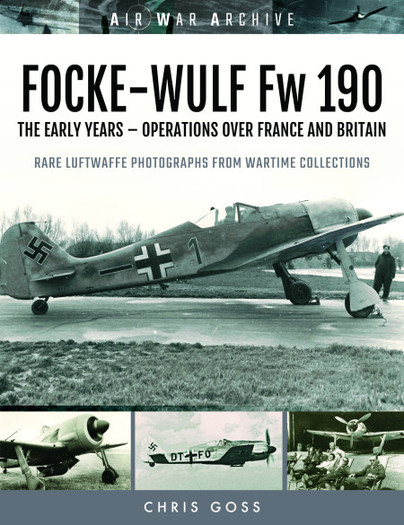 The Early Years - Operations Over France and Britain

The Focke-Wulf Fw 190 was widely regarded as the Luftwaffe’s finest fighter. It first saw service in France in August 1941, immediately proving itself at least the equal of the then latest Spitfire variant, the Mk.V.

There were a number of characteristics which contributed to the Fw 190’s success. The first of these was that it had been designed from the outset to be a weapons platform, rather than an aircraft to which weapons were added, as was the case with previous fighters. This meant that it could carry a wide range of armament in the form of various combinations of bomb racks, cannon pods and, later, unguided rockets.

It was also built to withstand heavy punishment, with the extensive use of electrically-powered equipment instead of the hydraulic systems which, used by most aircraft manufacturers of the time, were more susceptible to failure if damaged by gunfire. The relatively small diameters of electrical wires were much less likely to be hit by gunfire than larger hydraulic pipes.

The Fw 190’s BMW 801 D-2 radial engine also produced 1,677 horse power, giving the early Focke-Wulf 190 A-8 a top speed of more than 400 miles per hour – which was considerably faster than the early variant Spitfires.

It was the Spitfires with which the Fw 190 pilots frequently had to contend when in combat over the English Channel, and particularly during the Allied raid on Dieppe in August 1942, when more than 100 Focke-Wulfs (from Jagdgeschwaders JG 2 and JG 26) engaged Spitfires and Hawker Typhoons, claiming sixty-one Allied aircraft ‘kills’ against just twenty-five losses of their own.

The Fw 190’s weapons capability also saw it used as a fighter-bomber. The Fw 190 A-3/U3 Jabo was used with considerable effect against Allied shipping in the Channel and against the south-eastern coasts of England in 1942 in tip-and-runs raids. These fast, low-level attacks proved very difficult for the defending RAF squadrons to counter and only one Fw 190 was lost on these operations.

In this illuminating study of the early service of the Fw 190, Chris Goss has assembled a unique collection of photographs illustrating the wide use of this highly versatile aircraft.


Yet another superb addition to the Air War Archive series. Good, clear images ideal for the modeller and great historical and evolutionary detail.

This is a fascinating insight into this iconic aircraft.

If one seeks to examine this historical aircraft from multiple angles without visiting a museum, then this book will serve him well. Introducing military hardware in the form of photographs supplemented by detailed captions can be very effective than just using words. This presentational approach may be used to make other vehicles – either ground or aerial – highly accessible to newcomers and experts alike.

As in all the ‘Air War Archive’ titles, there are generally only one or two photographs per page, allowing them to be printed large, meaning they are useful to modellers. In this instance though, I have seen many of the photos before, (I have many books by both Chris Goss and the late Alfred Price), but don’t let this detract from this, (or the hopefully second volume), as there may well be many that you haven’t see before.

This is an extremely useful and relevant title for any scale modeller interested in the Focke-Wulf Fw 190 or the Luftwaffe in WWII. Not only that, anyone at all interested in aviation will welcome this title as it contains period photographs unseen before and that alone makes this book desirable.

Much inspiration for scale modellers is available within these pages and highly recommend it to all.

I believe that it is (like any volume in the "Air War Archive" series) an essential starting point for getting to know the planes of the Second World War, and Chris Goss here as in other volumes reviewed on the blog manages to capture the attention and excite for his competence.

I recommend this one highly... cover to cover fantastic content.

A great selection of photographs cover the Focke-Wulf Fw 190 and the crews that used them.

As in all the 'Air War Archive' titles, there are generally only one or two images per page, allowing them to be printed large, meaning they are useful to modellers.

The best years for the Fw-190 are those covered in this new book. There are some outstanding images that show the strengths and weaknesses well. There are good captions and extended captions in addition to concise text that introduces each part
of the book.

This is a book for the dedicated FW 190 ‘fan’ wishing to see in pictures and read in good supporting narrative such detail as to provide the foundation for unique reproduction or discussion.

This book celebrates another of my Airfix models from the 1950s – Germany’s greatest fighter aircraft, the F1 190. Britain’s Spitfire and Hurricane pilots didn’t have it all their own way!

A solid and useful contribution to the enthusiasts library.

The photo collection is first class, and the bulk of which I had not seen before... Modellers will enjoy the details seen in many of the photos and there are some great diorama display ideas. The dispersal of aircraft among trees and with foliage arranged around the parked aircraft, plus some individual hangers just large enough for an individual aircraft. One detail which grabbed my attention in the final chapter shows an array of cannon ammunition laid out on a tray in front of the aircraft, and that tray has been fitted onto what is clearly on old civilian pram, or perhaps better described as a 'baby carriage'. All together another fine addition to the Air War Archive series from Chris Goss and Frontline Books.