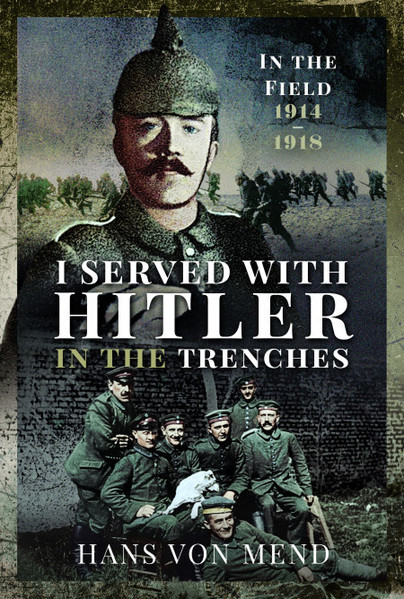 I Served With Hitler in the Trenches (Hardback)

As seen in the Daily Mail. Read the article online here.

You'll be £16.00 closer to your next £10.00 credit when you purchase I Served With Hitler in the Trenches. What's this?
+£4.50 UK Delivery or free UK delivery if order is over £35
(click here for international delivery rates)

This remarkable book details the shared experiences of Hans von Mend and his comrade in arms, Adolf Hitler, throughout almost the whole of the First World War. Mend writes of his call-up as a reservist in July 1914 and of joining the 16th Bavarian Reserve Infantry Regiment, more commonly known as List Regiment after its commander Colonel List. It was then that he first met the 25-year-old Hitler.

Together, they marched out to the front, and to Flanders, where the regiment was involved in the struggle for Wytschaete, where few men survived unscathed. Hitler was one of those, being promoted to lance-corporal and assigned to the position of regimental runner.

Over the course of the following years, the regiment participated in the battles of the Somme and Fromelles in 1916, and Arras and Passchendaele in 1917. At Fromelles the messengers had to navigate along a particularly dangerous path, which, according to Mend, Hitler ‘passed many times daily and, if he wanted to come through safely, had to more crawl than march. The slightest movement did not elude the English sharp shooters.’ Mend states the Hitler’s personal courage ‘was acknowledged by those around him’.

Mend wrote of Hitler’s conversations during quieter periods in the trenches, of how the future Führer spoke of his favourite topics, including art and painting. Mend claims that he ‘listened to him willingly and was amazed how he knew about this field … He could explain, like a professor, about German history of art.’ But, intriguingly, according to Mend, Hitler’s political views, which he was never shy in expounding, made enemies of some of his fellow soldiers.

Perhaps inevitably, Hitler was wounded – in his left thigh – and he was decorated with the Iron Cross Second Class, as well as, unusually for a lowly corporal, the Iron Cross First Class. The latter award was for stumbling into a French-held trench while delivering one of his messengers. Reacting quickly, he pointed his rifle at the French soldiers and ordered them to surrender; Hitler delivered twelve prisoners to his commanding officer.

Though I Served With Hitler in the Trenches was written in a certain era, it provides much detail about the personal nature and actions of Adolf Hitler. In some ways it is perhaps more insightful than many of the accounts that were to follow when the man who became the German Chancellor was known to the world and a new image of him had been formed.


Many books have been written about Hitler over the year, covering a wide range of subjects, some you want to know and may be some you do not. This was probably one of the first written in 1931 by someone who served with Hitler in the trenches of the First World War. Even though he served with Hitler it would not stop the author dying in custody in February 1942.

This book recalls the shared experience of Hitler and Hans von Mend, from his call-up in 1914, to joining up with the List Regiment, where he would come across the then 25 year old Austrian Adolf Hitler. Where they both took up arms in Flanders and experienced battle at Wytschaete, where few survived, and Hitler was promoted to a lance-corporal and became the regimental ‘runner’. The runner ran the messages from the frontline to operational command and vice versa and were often the targets for snipers.

We find out about the battles which both took part in, are the names of which still send a shudder down many people backs. Participating in the Somme and Fromelles in 1916 to Arras and Passchendaele in 1917. Battles which would not have been good to be a messenger in running along longer and longer and more exposed lines.

Von Mend also recalls some of the conversations he had with Hitler during the periods they were not fighting at the front. Von Mend claiming that Hitler’s favourite subject of art and thought he was a sort of professor of German Art History. He also said that some of Hitler’s views upset some of those he served with. But that is not surprising.

It also details how Hitler gained his Iron Cross 2nd class and how is bravery in the trenches then went on to earn, unusually for a corporal the Iron Cross 1st Class.

While it gives some interesting insights into Hitler and his war service, it does not point out that an NCO does not and should not become a commander in chief. He may have been good at running messages not so good at running an army.

An interesting book if you are trying to understand Hitler.

Always interesting to read about the early years of someone such as Hitler himself. Mend's memoir is compulsive and gripping.

Most of the book that is not about Hitler, is quite interesting and enjoyably written in a diary style, it was good to hear about everyday life for a german soldier in the trenches of France.

I could not put this book down, To think something like this has been around for a long time and not known by many is surprising to me. But then once you read this you will understand why its rarely discussed IMO. I never knew of Hitlers war experiences. I did know he fought in the First World War and was an artist. What id learned was he was a soldier much regarded by his comrades and the civilians where he lived as a dispatch rider. From all reports he was brave, sensible and determined to survive the madness of war. This book tells a true story and is surprising to learn. It becomes completely understandable how men turn to hate after bearing the attrocities done by both sides against each other. It is happening today still with peoples at war bearing grudges that happened in far memory. The details of war are covered and anyone that thinks its glorious will learn quickly how terrible it is and what is produces. Accurate and detailed in a conversational tone this book is a historical timeline of one mans memories in a time most of us would not believe ever happened.

Born on 16 March 1888, HANS VON MEND was the son of a smallholder near the Medieval town of Rothenburg ob der Tauber in Bavaria. During the First World War, Mend served in the 16th Bavarian Reserve Infantry Regiment alongside fellow volunteer Adolf Hitler. Having survived the horrors of the Western Front, Mend’s account of this period was published in 1931. Mend was arrested by the German authorities in 1940, and subsequently sentenced to two years in prison. He died in custody at Osterstein Castle, near Zwickau, on 13 February 1942. 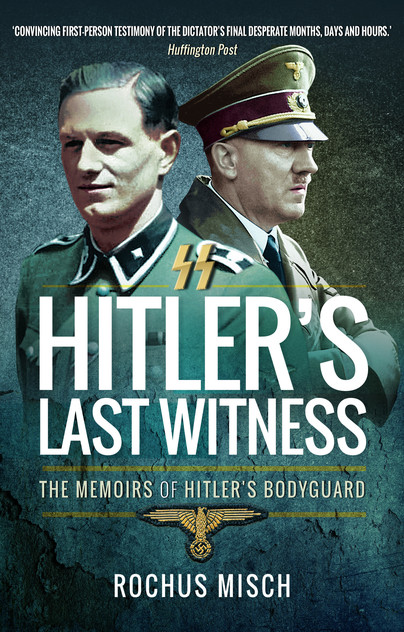 After being seriously wounded in the 1939 Polish campaign, Rochus Misch was invited to join Hitler's SS-bodyguard. There he served until the war's end as Hitler’s bodyguard, courier, orderly and finally as Chief of Communications. On the Berghoff terrace he watched Eva Braun organize parties; observed Heinrich Himmler and Albert Speer; and monitored telephone conversations from Berlin to the East Prussian Headquarters on 20 July 1944 after the attempt on Hitler's life. Towards the end Misch was drawn into the Fuhrerbunker with the last of the faithful. As defeat approached, he remained in charge…

Click here to buy both titles for £30.99
Customers who bought this title also bought...
Special Offer