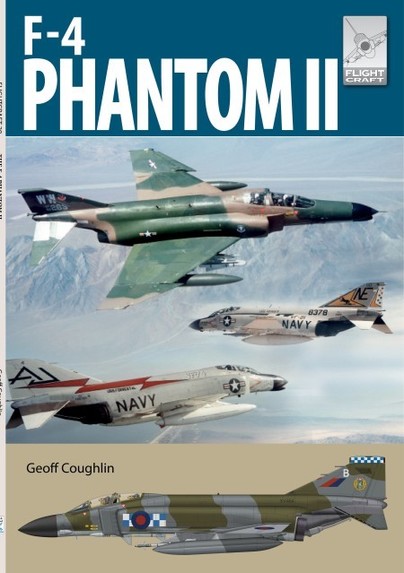 Preorder
Add to Wishlist
You'll be £13.59 closer to your next £10.00 credit when you purchase Flight Craft 28: McDonnell Douglas F-4 Phantom. What's this?
+£4.50 UK Delivery or free UK delivery if order is over £35
(click here for international delivery rates)

The McDonnell Douglas F-4 Phantom II was the most-produced American supersonic military jet with 5,195 aircraft being produced. By any standards the F-4 has been incredibly successful, used not only by the USAF and US Navy but many air forces around the world including Germany, Israel, Turkey and Japan.

The F-4 was designed as a long-range fighter interceptor and fighter bomber, excellent in all roles assigned to it. The Phantom has performed leading roles in multiple conflicts around the world from the Vietnam War through to the Gulf War. Although the F-4 left US service in 1996 it has continued in service with other air forces, only just being retired in 2020 from the Japanese Air Self-Defence Force.

This new title in Pen & Sword's highly successful Flight Craft series covers the development and operational use of the F-4 Phantom II and brings to life the variety of colour schemes and markings applied by many of the multiple air arms that have operated the Phantom around the world by including quality colour profiles.

Multiple model projects are included covering significant variants of the F-4 like the F-4B, F-4D, F-4E, F-4F, F-4G, F-4J, F-4EJ-Kai; British FGR-2 and F-4J(UK). All the popular model scales are represented: 1:72, 1:48 and 1:32A first for scale modellers everywhere – a book aimed at scale modellers of all levels interested in building the F-4 Phantom II.

GEOFF COUGHLIN is a huge F-4 Phantom fan and scale modeller. He has contributed to many scale model magazines and written several books. His modelling output is prolific, covering many genres from the First World War to the present day. Geoff is the founder and editor of the very popular online magazine www.scalemodellingnow.com.