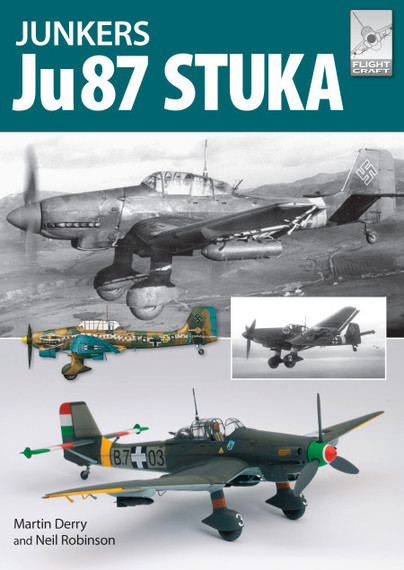 Add to Basket
Add to Wishlist
You'll be £11.89 closer to your next £10.00 credit when you purchase Flight Craft 12: The Junkers Ju87 Stuka. What's this?
+£4.50 UK Delivery or free UK delivery if order is over £35
(click here for international delivery rates)


If you want to immerse yourself in the building of a particular model aircraft, a book from the “Flight Craft” series could make the perfect companion for your project. Like all numbers in the series, this one covers its subject — the legendary Stuka dive bomber — on three levels. First, authors Martin Derry and Neil Robinson narrate the design, development and deployment of the machine, from the drawing board in the ’30s through its brutal testing ground in the Spanish Civil War, on to the glory days of Blitzkrieg, and finally into the Stuka’s twilight when its dwindling numbers became ever more vulnerable. Next, readers are treated to numerous beautifully rendered illustrations of paint schemes and unit markings to complement the generous raft of detailed photographs. And finally, the book offers a survey and analysis of pretty much all the Stuka kits that are or ever have been available, featuring images of professional-grade finished models as examples. Whether you plan to actually build a Stuka of your own or not, this informative, visually stimulating guide to the aircraft will be appreciated by any aircraft enthusiast.

In summary, a successful marriage between a publication for "warbirds" fans and model makers.