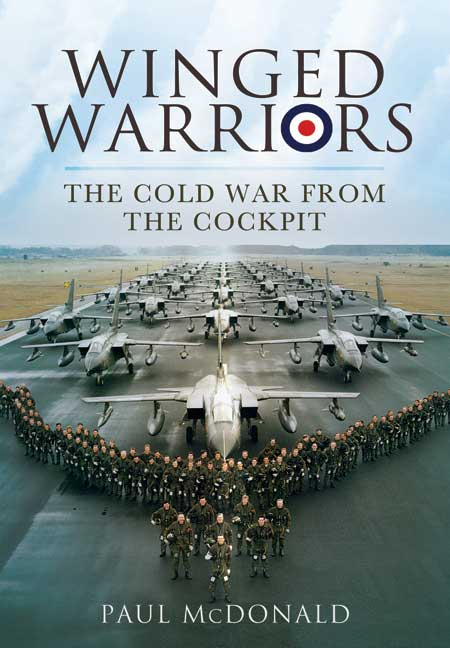 The Cold War From the Cockpit

Click here for help on how to download our eBooks
Add to Basket
Add to Wishlist
You'll be £4.99 closer to your next £10.00 credit when you purchase Winged Warriors. What's this?
Need a currency converter? Check XE.com for live rates

Winged Warriors is an open and honest account of one man’s perceptions and fears, his actions and mistakes, from a career that spanned four decades. The author spent fourteen years overseas and, at the height of the Cold War, served on two Tornado tactical nuclear squadrons in West Germany only fifteen minutes from responding in full measure to an anticipated Soviet onslaught. Earlier he had flown reconnaissance aircraft on NATO’s vulnerable southern flank. He was decorated for gallantry in 1980 and appointed OBE in 1995. Later as the senior RAF adviser in Kuwait he witnessed the air war against Iraq in 1998. Winged Warriors touches on many aspects of military service but it is not about war or war-fighting; it is about real people and their highs and lows, ordinary people who found themselves in extraordinary circumstances. And it is about the training and tragedy that affected a generation of aircrew many of whom gave their lives in preserving peace. It is those crews who stand out in Winged Warriors: true warriors in every sense of the word, blessed with an irrepressible sense of humour regardless of circumstance, a humour that was typically British and very typically RAF.

Paul McDonald is a retired RAF group captain and a former fast-jet pilot and flying instructor. In his youth he was an Air Cadet and he is a current Air Cadet Gliding Instructor.

'Although written primarily about Paul McDonalds fascinating AirForce career, this book has a much wider appeal. Despite his candid views on flying training and the difficulties this created in his early career, Paul intuitively developed a very skilful ability to write and describe his life in an entertaining and often amusing manuscript. He has dealt with some extremely difficult political topics, some sensitive interpersonal issues, and yet maintained a balanced and well informed perspective throughout. The irony of his final and successful appointments makes this a truly good read and a difficult book to put down once you start reading.'

This book is superb, written by an airman for airmen.
Paul starts with a cliff-hanger, and the pages seem to turn themselves. There is a wealth of detail as Paul leads us through his highly successful career with the RAF, told with humour and modesty - a must for anyone with an interest in aviation!

A memoir that reads like a novel charting the remarkable Royal Air Force career of Paul McDonald from young cadet to OBE and on to present day. From North East England to the Middle East. From steel town to steel nerves. This is a story of real people, real lives and real action told with a flair for writing and with a sense of humour uniquely British, uniquely RAF.

Winged Warriors is a memoir for those that don't usually read memoirs and fans of the genre alike. Inspiring on so many levels.

You don't need to be from a services background to relate to this book. "Bonny Lad" has a knack for making the information completely accessible, but this should be no surprise when you read of the experience he has as an instructor.

Action such as the reconnaissance mission to photograph the Kiev, the formidable Russian warship or life and death system failures in Jet Provosts and Tornados would rattle most of us beyond sanity. These are exciting reads among the detailed and at times very poignant narrative of an unusual career.

That career took in far more than the Cold War, taking Paul out to Kuwait at a time most of us only remember from TV news reports and the shocking footage of British tornado pilots battered and bruised in Iraqi `care'.

The Cold War itself is known to most only as a spy novel. Lethal injections delivered by means of an umbrella, the intelligence world and very secret. It was the war that never blew up. But it was very real and they were very dangerous times. Paul is keen and very right to highlight that despite the lack of full conflict, many paid the ultimate price. This book, I feel, is important in that it tells us what the Cold War really meant to the men and women on the front line ready to protect us from a very real threat and also what it could have meant to us at home had they not been there to deter an assault. It simply isn't taught or talked about let alone understood by the vast majority. It needs to be told and made real. Paul does this and does it well.

There are many things to learn from Winged Warriors. For one thing, pythons grow really fast. For another, Kuwait is not the place to work if you're at all paranoid, at least until you grow accustomed to how things are done. But what we take away from this book more than anything else is an enormous respect for those men and women of the Royal Air Force and their families.

This book is a joy to read. Written in a fast paced style the pages just keep on turning. It's contents refreshing, witty and insightful. Anyone with a military background will enjoy it, the excitement of military training, the honest accounts of scrapes and near misses and thd understated modesty of a real achiever are all described with humour and sincerity. The sharp mind of this fast jet pilot is clear to see. A really inspiring book, I cannot recommend it more highly.

This book provides a very valuable insight into a period of history that has still to be adequately discovered in print. The author has achieved a very readable account that has warmth and human interest, providing not just a military perspective but a flavour of social changes over the period covered. For a professional military pilot it is vert easy to attempt a book based on personal experiences and achieve some sound technical description that is hard for any but similar professional to follow and understand. This book has not fallen into that trap. The book has to be read from cover to cover to fully appreciate the warmth and humour that combines with necessary detail. Highly recommended.