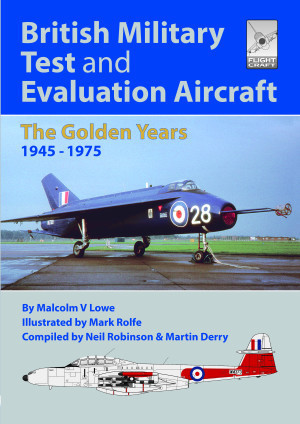 Click here for help on how to download our eBooks
Add to Basket
Add to Wishlist
You'll be £4.99 closer to your next £10.00 credit when you purchase Flight Craft 18: British Military Test and Evaluation Aircraft. What's this?
Need a currency converter? Check XE.com for live rates

It could be argued that the heyday of British military aircraft flight testing began in the 1940s, and continued throughout the three decades that followed, during the so-called Cold War period, and as such, the authors have purposely chosen the first 30 years, The Golden Years, 1945 to 1975, from the end of World War Two until the mid-1970s, as this was arguably the most exciting period with many wonderful and new types rubbing shoulders with wartime and immediate post-war designs that were utilised for development purposes, making for an eclectic mix of shapes and colour schemes.

Alongside the technical aspects of military testing and development, are the many and varied colour schemes and markings carried by the aircraft themselves – not only by the brand-new experimental designs, but by existing production machines, suitably modified, to greater or lesser degrees, to develop the technical advances in systems and weaponry.

Compiled by Neil Robinson and Martin Derry, who have authored several other Flight Craft books, with informative background text by well known aviation historian Malcolm V Lowe and superbly executed illustrations by Mark Rolfe. As with other books in the Flight Craft series, although published with aircraft modellers in mind, it is hoped that most aviation enthusiasts will find something of interest here too.

... it will be of great interest to modellers as well as enthusiasts fascinated by the many unusual (and often unique) schemes these aircraft wore.

This book will please test enthusiasts and aero modellers alike. The narrative is very good, describing each decade with excellent histories of the aircraft portrayed.

Engines, weapon and missile tests, radars, in-flight refueling, weather research, Concorde or basic research, this small catalogue is as colorful as it is attracting with its many illustrations.

"This good first impression is maintained
throughout."

The FlightCraft series has proved extremely popular with model makers and engineers, but is attracting a growing readership because it covers subjects in visual detail not usually available. This series addition is described as ‘Special’ rather than carrying a series number. It is special tribute to the Golden Years 1945-1975 – Very Highly Recommended

Overall this book is a fantastic resource for the modeller, again as with all Flight Craft books this should provide great references and inspiration to maybe get a conversion or two on the bench or look at reproducing some of the fantastic and rarely seen schemes the test aircraft of the post war period wore with pride. The photographs and profiles are good quality and the accompanying text and captions are informative. This volume is definitely one you should pick up if you like aircraft of the period.

This publication would easily make a single source reference for what could be a fascinating modelling project. Equally, the information within the pages is detailed enough to provide an interesting read for the aviation enthusiast. Highly recommended.

The development of British military aircraft is examined in estraordinary and fascinating detail in Malcolm Lowe's spectacular book.

This I find interesting. The texts are to the point, informative and good readable.

This is a very nice book indeed.

Any book with a colour photo of the Short SB.5, WG768, on the front cover is already ahead on points. This good first impression is maintained throughout. The photos are well chosen and the line drawings are beautifully executed and perfectly reproduced on a high quality A4 format paper, which do them full justice – at a reasonable price... Moreover, modellers, at several levels of experience and skill, should find the colour schemes and markings quite irresistible, as well as being inspired to scratch-build some of the modifications.

A pleasure for the eyes of anyone who loves aviation. A book to buy absolutely!

Well the profiles are generally beautifully drawn, many of the photos within are new to me, and most importantly just about every profile has its sources quoted. This means you can at least check the original source to see if the profile is accurate, but generally it is worth a good old Google image search before relying on any profile in any publication! It is a superbly varied collection of inspiring profiles at the end of the day, and reasonably priced. Certainly worth a look and a good jumping off point for further research.

The colour and marking schemes that are illustrated should give plenty of inspiration for modellers while the aviation historian will I think love this one as well. Rather as the sub-title of the book say, this period really were the 'Golden Years' of British aircraft design, when many of our designs really were leaders in the aviation world. A very good 'Special' in the series.

There are many modellers who like to take a production aircraft kit and modify it to a variant of that aircraft. For those modellers, this book really must be in your library.

It has many interesting, one-off, aircraft from 1945 to 1975, an era when aircraft development was at its height and, in same examples, its wackiest.

The colour illustrations of test aircraft alterations and livery are beautifully aimed at the modeller to help to get that perfect model. This along with the description and photos of what, where and why these aircraft were developed will add to your knowledge and understanding of the golden years of aircraft development.

Malcolm V Lowe is an established historian and writer, specialising in military history, particularly of the twentieth century. A published author for over 30 years, he was born in Yeovil, Somerset, but is now based principally in France. His writing has encompassed many aspects of aviation and military history, and he has authored or co-authored over twenty published books. This is in addition to literally hundreds of articles published in magazines and newspapers in several countries. His writing has been translated into several different languages, including German, French and Czech, and he is an accomplished linguist able to write in several languages. He has built up an extensive array of contacts within the research community, and has close links to several museums including the Czech Republic’s Letecké Muzeum (Aviation Museum) at Prague/Kbely. Amongst his particular interests are the aircraft of Nazi Germany’s Luftwaffe, a subject that he has specialised in for many years. This includes the famous Messerschmitt Bf 109, the subject of this book.