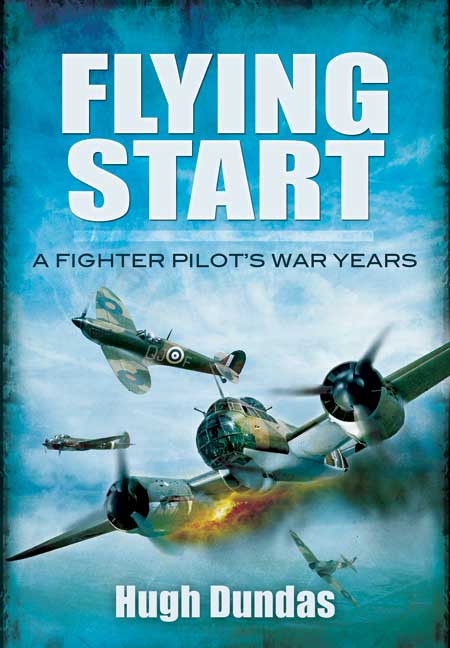 Add to Basket
Add to Wishlist
You'll be £14.99 closer to your next £10.00 credit when you purchase Flying Start. What's this?
+£4.50 UK Delivery or free UK delivery if order is over £35
(click here for international delivery rates)

This is the autobiography of Group Captain Sir Hugh Dundas CBE, DSO, DFC, who was one of the most distinguished fighter pilots of World War II. He writes of his wartime experiences, and particularly of his period as Squadron Leader and Wing Commander and his involvement in the Battle of Britain.

This is an important book for historians and enthusiasts, but it is also an important social history of a period that is rapidly passing into history as those who were there and survived now approach the end of their life.

Brought up in the west riding of Yorkshire, Hugh Dundas became one of the leading fighter pilots in the Battle of Britain. He went on to serve throughout the war and became the youngest ever group captain. His war record was up there with the best, but he remained a modest man and it was not until 1988 that his war experiences were set down by himself to appear in book form. It was a stirring life of comradeship and high adventure but with death ever-present, riding on the wings of these knights of the sky. Dundas captures the atmosphere of those days and the feelings and fears of the men who flew in combat. The world should never forget what the RAF did and it is good that books such as this are being republished to a new generation of readers who never lived through the days of Hugh Dundas.

The book is exactly what it claims, but it stands out from many other accounts of war-time air operations because of its very clear coverage of events both at the fighting and at the operational levels. From 1939, when 'cocky' Dundas joins the Royal Air Force, right through to 1945 when operations cease, he has used his letters home and other sources such as the unit Operations Record Books to give a comprehensive coverage of his varied experiences during the Battle of Britain and then in North Africa and Italy, including his encounters with many senior figures of the time. His was a remarkable career. In six years he rose from the rank of Pilot Officer to that of Group Captain, still aged only just twenty-four! It is a gripping tale well told, and one that easily holds the reader's attention throughout. The book is a reprint of the original which dates from 1988; this edition suffers from three dozen or so photographs, all of them uniformly appalling quality.

Group Captain Sir Hugh Dundas CBE, DSO, DFC, who was one of the most distinguished fighter pilots of World War II.