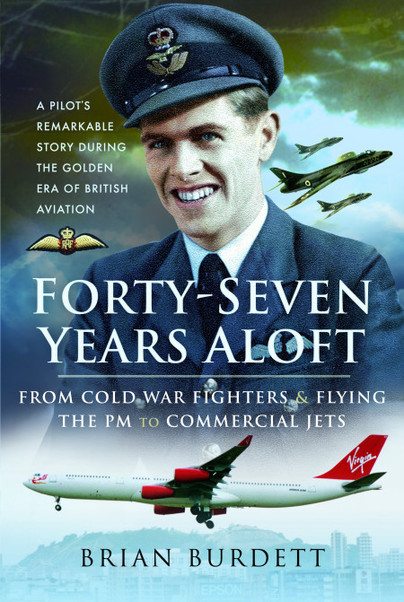 Click here for help on how to download our eBooks
Add to Basket
Add to Wishlist
You'll be £4.99 closer to your next £10.00 credit when you purchase Forty-Seven Years Aloft: From Cold War Fighters and Flying the PM to Commercial Jets. What's this?
Need a currency converter? Check XE.com for live rates


A journey through 47 years of aviation history through the memories a one pilot. From early flight training through RAF ‘antics’ in jet fighters, and civil aviation to retirement. This book covers Brian’s whole life with aircraft. It’s fascinating... thoroughly enjoyable.

Article:
WASN'T EARTHLY' Retired RAF pilot reveals multiple close encounters with UFOs – including one shaped like the Michelin Man as featured by

“I have finished your book. In my opinion it met your objective of presenting the world of aviation to a layman who is interested in aviation. This is accomplished using layman’s language. I found the afterword, “I Don’t Like Flying” particularly useful to a person who has a fear of flying.”

“I am not in the habit of contacting authors of books I have read (this is the first) but after finishing your book I wanted to let you know that I thought it was an amazing story, and a great read. I can only imagine the time it must have taken, and the memories stirred, of going back through your logbooks. What a tremendous source to be able to use.”

“I have finished reading your book and found it fascinating, especially in the civil flying times and how you coped with some of the oppressive countries’ rules etc.

We have purchased another copy from Pen & Sword for my father in law who is 94 and was refused to join the RAF because of asthma but always wanted to be a pilot, he is also greatly enjoying your book as well.”

"I completed reading your book yesterday, having started at about 10:30 in the morning. I finished a great read at about 5 pm!"

"I am a few years older than you and much of the book was a happy reading of the repeat of my own life.”

"Congratulations!! This is a marvellous book, great storytelling along with all the technical details. Writing it down is like living it twice. You are one of those fortunate persons whose “work was a way of life” and you were present for every moment.

I knew there had to be thrills - we live down the road from MonthanDavisAFB and a lot of pilots train here. Lying round the pool, watching them, and hearing them zooming around above in that cloudless, blue sky, “I think they’re having fun up there”.

I imagine a younger generation of aviators will be fascinated by your description of the evolution of airplanes and your life as a pilot.”

"I started your book last night and was very touched by the kind words of your autograph. I read your first chapter with great interest. I like your style and the way you describe various events… It is going to be good reading!"

"Congratulations on your fascinating book. A very good read and a 'must' for all the present and future generations of pilots and those involved in the flying industry.”

A fascinating career in military aviation and commercial aviation spanning 47 years. This book could be the story of many a pilot through the 1950s, 1960s and 1970s – Highly Recommended.