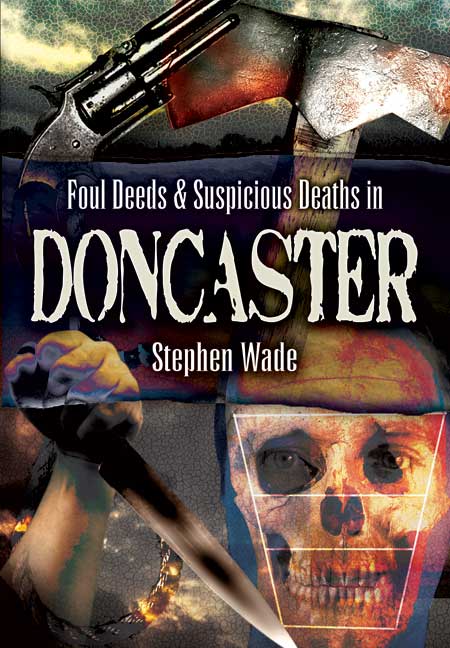 Add to Basket
Add to Wishlist
You'll be £12.99 closer to your next £10.00 credit when you purchase Foul Deeds & Suspicious Deaths in Doncaster. What's this?
+£4.50 UK Delivery or free UK delivery if order is over £35
(click here for international delivery rates)

Doncaster has world-wide fame as a railway town. For many years the name was associated with engineering, transport and of course coal. But there is a darker aspect to its history. The sinister side is explored through the research and writing of an experienced crime historian. Sensational tales have been uncovered concerning a variety of dark deeds, including a cloak-and-dagger meeting in an Elizabethan tavern and the murder of a Civil War leader. Over the years Doncaster and district has been the scene of riots, Suffragette militancy, terrible domestic tragedies, sad suicides and brutal murders. The stories here range from the notorious Baccarat Scandal which shocked Victorian society to a betting-room robbery at the races. The author also reminds us about famous criminals associated with the town, as well as a Prince and a hangman, a notorious fraudster , even a London playboy. Shocking, surprising, at times chilling but true, a new layer of the town’s social history is now available for the first time; but not for the feint hearted.

Stephen Wade is a professional writer specialising in regional crime. He has written several volumes for Wharncliffe’s acclaimed Foul Deeds series. His most recent books include Tracing Your Police Ancestors and Britain’s Most Notorious Hangmen. Tracing Your Criminal Ancestors and Cold Cases Revisted, a casebook of DNA forensics in major crime investigations, are forthcoming. He lives near Scunthorpe.

"Foul Deeds and Suspicious Deaths in and Around Doncaster" is, as the title suggests, a chronology of crimes and misdemeanours committed in the Doncaster district from the times of Queen Elizabeth I in the 1580s right through to the post-war years of the 1950s. The writer, Stephen Wade, is a specialist in the subject and has written several other tomes about crime in the region. His latest missive details cases of criminal activity much of it the result of poverty, desperation and of a pre-wellfare state era when the "lower orders" had to pretty much fend for themselves. The chapter titles read like something out of a Sherlock Holmes adventure such as "A Revenge Plot at the Bull Inn" or "The Rainsborough Murder" to "Lady Mabel's Slander". All in all this is a book that will fascinate, surprise and horrify as it details all manor of crime from murder, rape, manslaughter and fraud committed by people in Doncaster and the area surrounding for all sorts of motives from greed to envy as well as anger and patriotic fury. It shows us that as far as crime is concerned little, over the centuries, has changed.

If you mention Doncaster it is most likely that images of the races, coal mining or railways are likely to appear but what about women's suffrage, murder or suicide? This edition of Foul Deeds reveals a darker side of Doncaster tracing everything from a notorious Victorian Baccarat scandal to the story of a ten year old who tried to kill. Stephen Wade through an experience of the area and previous author of other regional crime books allows this disconcerting journey through the railway town's forgotten past to be uncovered through a chapter by chapter walkthrough of terrible event after terrible event. Reinforced by dramatic drawings and extracts from newspapers of the time, the book divulges chilling chunks of information that will leave the reader firmly intrigued.

Doncaster has world-wide fame as a railway town and is associated with transport, engineering and of course coal.
But there is a much darker and chilling history to Doncaster this sinister side is explored through the research and writing of an experienced crime historian who uncovers layers of the towns social history which is described as "Not for the faint hearted".
Stephen Wade uncovers a variety of sensational tales concerning dark deeds including a cloak-and-dagger meeting in an Elizabethan tavern and the murder of a Civil War Leader.
Over the years Doncaster has had its fair share of Riots, Suffragette militancy, Terrible domestic Tragedies, Sad Suicides and Brutal Murders.
The author also reminds us of famous criminals associated with the town as well as a Prince, Hangman, Notorious Fraudster and even a London Playboy.
Shocking, Surprising and at times chilling this book is an essential.

With a taste for the sinister, this book explores the countless dark deeds which swamp Doncaster's history. Although enjoying fame as a railway town; and its associations with coal, transport and engineering, the town's more chilling nature is brought to bear in sensational tales of crime. Such stories range from the notorious Baccarat Scandal in the Victorian era, through to cloak-and-dagger meets in an Elizabethan tavern, to a betting-room races robbery. London playboys, hangmen and fraudsters also get a mention in this frightening, but accurate, series of tales of the town. An insightful and captivating read for those who enjoy true crime; but, not for the feint-hearted.

Stephen Wade is an experienced crime historian whose uncovering of Doncaster's darkest deeds certainly lend credence to it being far more than 'just a railway town'. This collection of brief tales is strictly factual and straight down the line - the author is happy to let the events themselves take centre stage. Of course, one (who enjoys a gruesome tale) would expect a book entitled 'foul deeds' to contain stories of murder ... and this doesn't disappoint. From ten year old Frederick Mason who lured other children away before attempting to beat them to death, to the murderous rage of a drunken husband towards his wife, we are offered a plethora of tales, many of which chillingly foreshadow famous crimes in more recent times. But it is not all about such dastardly acts. There are various other sources of intrigue bound to interest all - robberies, slander, blackmail; indeed there is even a 'curiosities' section to finish which offers some fascinating bite-sized chunks of Doncaster's more unusual stories. Definitely a dark read for those interested in local history and not too squeamish!