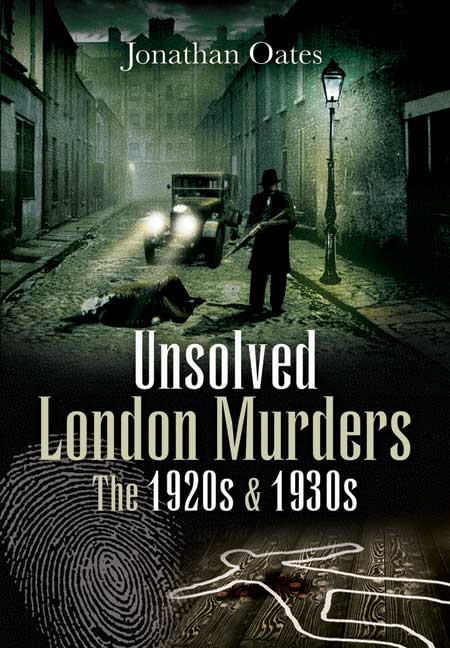 Unsolved crimes have a special fascination, none more so than unsolved murders. The shock of the crime itself and the mystery surrounding it, the fear generated by the awareness a killer on the loose, the insight the cases give into outdated police methods, and the chance to speculate about the identity of the killer after so many years have passed - all these aspects of unsolved murder cases make them compelling reading.

In this companion volume to his bestselling Unsolved Murders of Victorian and Edwardian London, Jonathan Oates has selected over 20 haunting, sometimes shocking cases from the period between the two world wars. Included are the shooting of PC James Kelly in Gunnersbury, violent deaths associated with Fenian Conspiracies, the stabbing of the French acrobat Martial Lechevalier in Piccadilly, the strychnine poisoning of egg-seller Kusel Behr, the killing by arsenic of three members of a Croydon family, and, perhaps most gruesome of all, the case of the unidentified body parts found at Waterloo Station.

Jonathan Oates describes each of these crimes in precise, forensic detail. His case studies shed light on the lives of the victims and summon up the ruthless, sometimes lethal character of London itself.

Enjoyable reading about 20 unsolved cases from long ago. The author includes reference to the source files used to gather the information contained in the book. The narrative flows well and is well written.

I'm always happy when true crime covers things I've never heard of. And this covered all crimes I wasn't familiar with! The author is very correct in saying that most people know the famous Victorian and even Edwardian crimes, but not this era. It's a really quick read with short chapters dedicated to an unsolved crime. I wish that some had gone into more depth, but it's a great collection of unsolved London murders!


What It's About: This true crime book is a collection of twenty haunting and shocking unsolved cases that happened in London from the 1920s and 1930s:- railway murder, fatal shooting of a police officer, IRA killings, serial killer in Soho and so forth.

My thoughts: Unsolved cases are like an itch in the brain and you can't scratch it. But I enjoy reading about them to find out what went wrong with these cases and how they ended up being cold cases. So, naturally this book caught my attention especially when they are cases from the 1920s and 1930s.

I enjoy reading old cases because they give us a glimpse of the society's way of life back then and how the investigations were conducted despite the limited technology and knowledge in forensics we have today.

I appreciate that the author indicated his sources for these cases in the introduction page. Why is this important? Well, I personally think it will affect your expectations when reading this book. Ok, these are really old cases and the sources is pretty limited to case files, newspaper reports, memoirs of serving officers, and so forth. So, this book is written like case file, "stick to the facts" style of writing without any sensationalism which may be dry and dull for some readers.

Overall, this is a pretty good read and the cases are interesting. It is not a book to be read in one sitting since there are a lot of information and can be overwhelming. I think the author did a great job in sharing these cases.

The book is good. There are a lot of facts present in the book which means there was a lot of research done while getting the book together.

The author outlines the facts of 20 unsolved murders in London between 1920 and 1940. I liked that these facts were often given in the voice of those involved (police, doctors, witnesses, etc) through reports and statements. One thing I found very interesting was how often people wrote in to the police (sometimes anonymously; sometimes falsely). It was more often than I realized. I also really enjoyed when the author made connections to Agatha Christie or used quotations from her books. Christie wrote many books in the 20's & 30's and juxtaposing her fictional murders with actual ones was interesting.

I think this would be an excellent choice for anyone with an in depth interest in crime content.

This is a highly specialized book written for true crime buffs. The information included within is gleaned from police reports, newspaper articles, and such. There is quite a bit of historical information which is useful in knowing the context of the stories.

Unsolved London Murders is a compendium of 20 true crime stories of ALL unsolved murders across London in the 20s and 30s in all of their macabre horror, mystery and real-life barbarism.

Meticulously researched, the prose is strong, readable, and incredibly descriptive. All cases are unsolved and the murders described vary in modus operandi, reasoning, and at times, brutality. From prostitutes, a heinous child murderer, the murder of London landlady, and a potential serial killer, the 20 cases featured also include post mortems, witness statements, police procedurals of the time, and a selection of location images. Overall this is an enjoyable look at murders committed during those brief intermittent war years.

Often delving into London’s seedy underbelly it is interesting to note that crimes of this nature did happen during the (often professed) more innocent times, and it’s an easy and fascinating read overall.

A short introduction into policing in the 1920s and 1930s is followed by a chapter on crime between the wars. We are next treated to a nice little selection of vignettes of some of the unsolved cases from 1920s and 1930s London. They are not overly long - covering the who (victim), what (the murder), how (was it committed), and though some credible suspects lurk just off page and potential reasons given for the crimes, no-one has yet been brought to justice.

Definitely one for the fans of true crime - easily readable, and very accessible for a broader range of reader.

This book is exactly as described.

The author takes you through 20 unsolved murders in London, talking you through what happened, who the victim was, and the suspects. Then they explain what the police did to try and catch the killer, and what made the cases unsolvable.

I enjoyed this book, learning about what happened back then and how some of the murders shaped London as we know it.

I enjoyed this book, I discovered lesser known cases that I’d never previously heard of, made all the more tragic that a killer was never caught, and that the victims to this day have no justice.
We are left to ponder on the idea that we have so many resources to hand now; forensics and sciences, not to mention criminal psychology play such a part in our modern policing and investigations, 100 years on we are in a much better position to bring murderers to justice.

I will definitely be looking at this author more in the future, and I’m very grateful to have been introduced to his work.