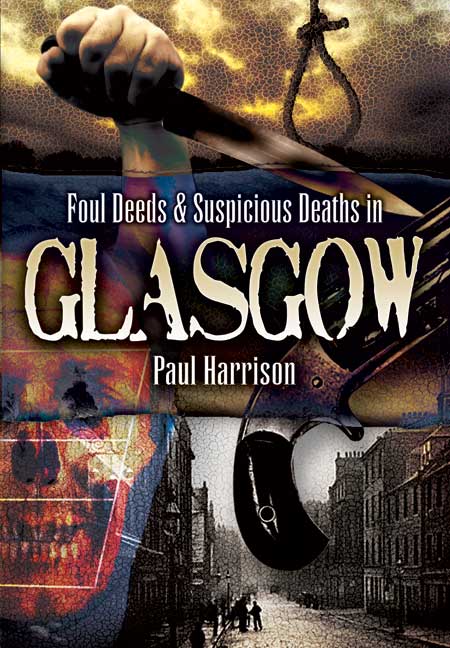 Click here for help on how to download our eBooks
Add to Basket
Add to Wishlist
You'll be £4.99 closer to your next £10.00 credit when you purchase Foul Deeds & Suspicious Deaths in Glasgow. What's this?
Need a currency converter? Check XE.com for live rates

The criminal cases vividly described by Paul Harrison in this gripping book take the reader on a journey into the dark secret side of Glasgow's long history. The city has been the setting for a series of horrific, bloody, sometimes bizarre incidents over the centuries. From crimes of brutal premeditation to those born of rage or despair, the whole range of human weakness and wickedness is represented here. There are tales of secret passion and betrayal, robbery, murder, gangland violence, executions, and instances of domestic cruelty and malice that ended in death. Among the fascinating and varied selection of cases Paul Harrison covers are an IRA ambush and gun battle, the policeman who murdered his lover, a Wild West-style shootout between police and a desperate robber, a sequence of horrendous serial murders including the case of Bible John, and the extraordinary acquittal of John Mitchell Henderson.
The human dramas the author describes are often played out in the most commonplace of circumstances, but others are so odd as to be stranger than fiction. This grisly chronicle of the hidden history of Glasgow will be compelling reading for anyone who is interested in the dark side of human nature.

It is written by an ex-police officer who served for over three decades, and is full of investigative detail. The amount of research and information included in the book is phenomenal and makes the case realistic to the reader.
This is not a pleasant book to read, but gives a fascinating and absorbing glimpse of Glasgow's underworld told from the perspective of a profession police detective.

This book is well worth the read to any student of crime in Scotland.