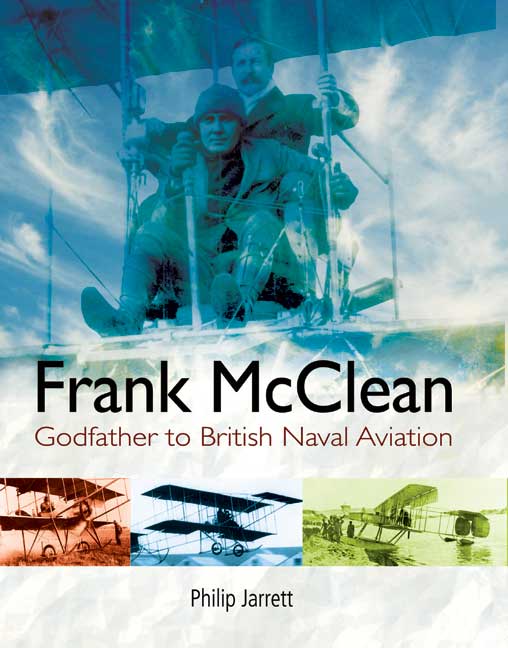 Add to Basket
Add to Wishlist
You'll be £25.00 closer to your next £10.00 credit when you purchase Frank McClean: Godfather to British Naval Aviation. What's this?
+£4.50 UK Delivery or free UK delivery if order is over £35
(click here for international delivery rates)

During aviation’s pioneering years Francis Kennedy McClean used his vast inherited wealth to help the now famous Short Brothers company become established as one of Britain’s greatest aircraft manufacturers and, in doing so, he helped the Royal Navy’s first pilots into the air. In effect, he was Godfather to British naval aviation.
But McClean did much more than even that. He was himself a balloonist and pioneer aviator, flying with Wilbur Wright in France in December 1908. He provided the Royal Aero Club with one of the first flying grounds in the UK; personally purchased no fewer than sixteen aeroplanes from Short Brothers before the First World War, and also acted as the company’s unpaid test pilot. Convinced that aviation was destined to play a vital role in the nation’s defence, he made his own aeroplanes freely available for training and ensured that the Navy had a suitable site from which to fly, founding England’s first naval flying school, at Eastchurch in Kent. His flight up the Thames to Westminster on 10 August 1912, during which he flew between the upper and lower spans of Tower Bridge and passed beneath the other bridges, caught the public imagination, but despite all these achievements he remained unassuming, modest and reticent.
This is a fascinating and informative account of McClean’s great influence on early aviation, and his achievements and significant contribution to naval aviation are revealed here for the first time.

Philip Jarrett is an well-known author and consultant and an internationally recognised authority on early aviation. He has edited many books and written numerous papers. His biography of British aviation pioneer Percy Pilcher, Another Icarus, was published by the Smithsonian Institution in 1987. He is a regular contributor to Aeroplane Monthly.

Frank McClean was an aviation pioneer who helped establish Short Brothers as an aircraft manufacturer while he himself was a pilot of considerable note in the pre-war years. He largely avoided publicity and perhaps in consequence his influence and role was largely forgotten in the post war years. Nevertheless, his obituary refers to him as the 'Godfather of Naval Aviation' and this book is a fascinating tribute to his trailblazing activities. This is a beautifully illustrated book and is highly recommended for anyone interested in early aviation.

Jarrett is firmly enough grounded in the subject to be able to provide sufficient technical detail to give the reader a basic understanding of operating principles, aerodynamic theory and flight behaviour, all the while advancing the story through letting McClean and cohorts speak for themselves in the form of diary excerpts, quotes, or the like. Well-captioned and reproduced period illustrations flesh out the narrative, and there is quite an extensive Bibliography.

Readers of previous publiciations by Philip Jarrett will not be surprised that he has once again produced a thoroughly researched and informative biography of one of Britain's pioneer aviators.

Philip Jarrett's detailed and readable account chronicles not just the life on one exceptional man, but it is an absorbing history of the early flying machines and the pioneers. This well researched book with some fine photographs will serve as a valuable reference tool for the celebrities and events concerning the aviators and their machines.

It is a must for anyone with an interest in the development of Naval Aviation and the photographs are worth buying the book for. Philip Jarrett has done an excellent job. I should go and get a copy if I were you.

Frank McClean was a facinating man, and this well illustrated volume does him justice.

An excellent example of the author's work on early aviation. This is a well-illustrated book that provides background to a patriotic individual who helped to build up what became the Royal Naval Air Service.

Philip Jarrett has gathered all the facts he can at his remove - you can always rely on him for very careful research and a prediliction to distrust popular myth - and written an excellent aeronautical biography. This book nicely fills a gap in aeronautical biography.
McClean was a very significant figure in the development of British aviation. The text and photographs provide a valuable addition to British aviation history that deserves a place on your shelves.

This book I found to be a most delightful read.

This book is well recommended. The Author has done an exceptional job and has to be congratulated for such a significant piece of research.

This is a detailed and informative account of one man's remarkable influence on early aviation.

This is a fascinating and informative account of McClean's great influence on early aviation, and his achievements and significant contribution to naval aviation are revealed here for the first time.