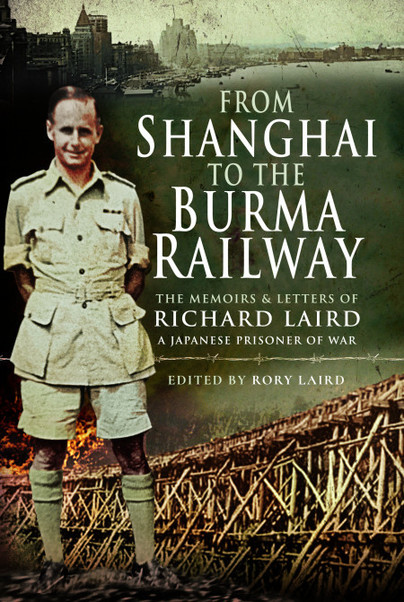 From Shanghai to the Burma Railway (Hardback)

The Memoirs and Letters of Richard Laird, A Japanese Prisoner of War

Add to Basket
Add to Wishlist
You'll be £19.99 closer to your next £10.00 credit when you purchase From Shanghai to the Burma Railway. What's this?
+£4.50 UK Delivery or free UK delivery if order is over £35
(click here for international delivery rates)

Richard Laird’s previously unpublished record of his wartime experience as a Japanese prisoner of war ranks among the most graphic of this shocking and deservedly popular genre.

Captured after fighting in the Malayan Campaign he was incarcerated in Changi before being drafted as slave labour with ‘F’ Force on the notorious Burma Railway. He was one of only 400 out of 1600 to survive Songkurai No 2 Camp, despite disease and terrible hardship.

His moving memoir begins with a rare description of ex-patriate life in 1930’s Shanghai with the Sino-Japanese war raging around the European cantonments.

An additional dimension to his story is the developing relationship between the author and Bobbie Coupar Patrick to whom he became engaged shortly before the fall of Singapore. Bobbie’s letters graphically described her dramatic escape to Australia and work for Force 136. They were reunited in Colombo, Ceylon and their son has been instrumental in compiling this exceptional record.

Three appendices round off this superb book including the official report on the hardships and losses suffered by ‘F’ Force.


This book, based on the memoirs and notes of Richard Laird, starts from colonial era Shanghai and therefore is rare in that it covers the real start of World War Two through to the victory over Japan and the return to peace. The writer of the source documents provides not only detail of his experience as a soldier and POW, but that period coming into the Japanese assault on China and then on through the rapid Japanese advance into Indo China, Malaya and Singapore – Very Highly Recommended.

“ It is not often I get excited about books, but this book is put together very well. It is hard to put it down."

"Things in particular I picked up on:
(1) I didn’t know there was a Shanghai Volunteer Force, how it was formed and what they did to protect Shanghai.
(2) Understanding how Shanghai was split into sections pre-war, and the social life in the City at that time. The same with Penang; it came to life in the book – I felt I was there.
(3) ‘F’ Force walked 300km through the night in the dark, from Ban Pong to Songkurai. These men were not fit, many taken from their sick beds with Japanese promises of better food and time to recover.
(4) Full report of Major Bruce Hunt who was commanding the Burma Hospital – it helps understand what the medics went through.
(5) If you think you know everything about the FEPOW experience – read the book."

"It is a joy to read. Highly recommend it."

Ron Taylor for The FEPOW Family

The book and the story is really fascinating as the mix between written testimony and letters from Laird and Bobbie and notes by Rory to contextualize the events manages to return much of that terrible experience that was the construction of the "Death Railway", of the return to desolation of Singapore (in the labor camp in which Laird was destined, the Songkurai camp nr. 2, 400 out of 1600 of those who had left died), of the climate of uncertainty that passed from the end of the war to the return to civilian life and that for Laird meant hugging his beloved Bobbie again.

In addition to Richard Laird's memoirs and history, the book has three excellent appendices that concern Captain Cyril Wild of the Ox & Bucks, who will then take care of bringing Japanese war criminals to military justice, a report by Bruce Hunt on the Tanbaya hospital ( placed on the railway line) and another report that, drawn up by Lieutenant Colonel Dillon was intended for the Japanese and to improve the conditions of the prisoners and their treatment. These three documents are still very valuable to better understand the story narrated in the book.

Richard and Bobbie’s son, Rory Laird is a former Fleet Air Arm officer with a deep interest in family history. He lives in Scotland with his wife Shelagh, where he pursues his other interests in hill-walking (he has completed all the Scottish Munroes) and, on a not very business-like basis, landscape gardening and antique furniture restoration.