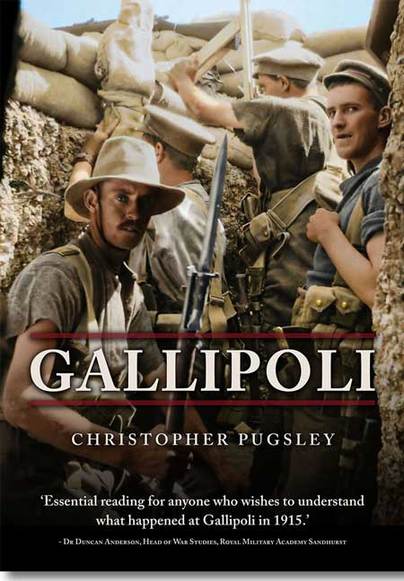 Add to Basket
Add to Wishlist
You'll be £16.99 closer to your next £10.00 credit when you purchase Gallipoli. What's this?
+£4.50 UK Delivery or free UK delivery if order is over £35
(click here for international delivery rates)

Order within the next 9 hours, 41 minutes to get your order processed the next working day!

The definitive account of New Zealand's role in the disastrous 1915 Gallipoli campaign, when a British-led expeditionary force met the Turkish army in an attempt to wrest control of the Dardanelles, comes alive in an updated edition, liberally illustrated and brilliantly analysed by the doyen of military historians.

In this edition we see Gallipoli through the eyes of those who fought in the campaign, through the pages of their letters, diaries and reminiscences and through the author's research into a vast field of unpublished primary source material and photographs.

Gallipoli does justice to the reality of this epic campaign, and deserves a place on the shelves of history enthusiasts worldwide.

This is a well thought out and informative book that celebrates the comradeship between the New Zealanders and Australians while defining the difference between the two nations. It contains interesting photographs and has very useful appendices. There is a comprehensive chronology, useful statistics, a superb bibliography, index and glossary. Although this is not a new book, it is worth seeking out and reading. I recommend it to anyone who has an interest in Gallipoli and the Great War in general. It is a good read and worth having on your bookshelf.

I bought this book when it first came out in 1984 and this new volume is a very welcome reprint of the original. This superb book, written by New Zealand’s leading military historian, tells the story of the New Zealand Expeditionary Force (NZEF) at Gallipoli. The NZEF were part of the Australian and New Zealand Army Corps (ANZAC) and all too often people forget ANZAC contained New Zealand troops as well as Australians. The book looks at the raising and training of the NZEF and then follows their experiences in Gallipoli from the landings at ANZAC through to the final battles. The NZEF also fought on the Helles front, where the British and French were, and this is not neglected. This is a finely written account of the Gallipoli campaign and arguably a classic volume on the subject. Essential reading for anyone with an interest in what the NZEF did in 1915.

This is now the fifth edition of what is surely one of the great classics of Gallipoli literature.