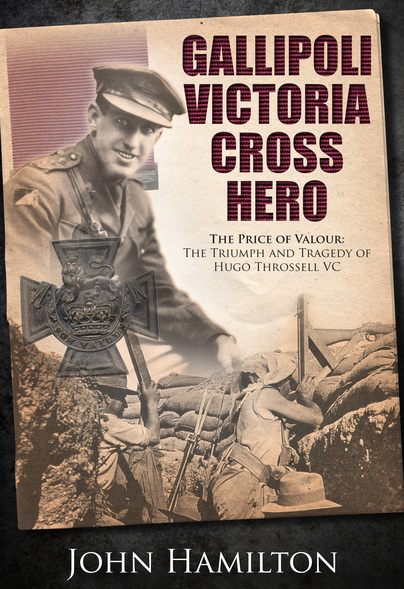 The Price of Valour - The Triumph and Tragedy of Hugo Throssell

Add to Basket
Add to Wishlist
You'll be £25.00 closer to your next £10.00 credit when you purchase Gallipoli Victoria Cross Hero. What's this?
+£4.50 UK Delivery or free UK delivery if order is over £35
(click here for international delivery rates)

The son of a former Premier of Western Australia, Hugo Throssell, volunteered to join the Imperial Australian Force which was shipped to Gallipoli in 1915. He was a member of the 10th Australian Light Horse which fought in a dismounted role in Gallipoli. He was involved in the famous charge of the 10th Light Horse at the Battle of the Nek and the Battle of Hill 60 where his actions saw him being awarded the Victoria Cross.

During that battle Throssell was severely wounded a number of times when the enemy attacked his position, but he refused to leave his post or to seek medical attention until the attack had been beaten off. As soon as his wounds were dressed he went back out into the firing line until he was ordered out of the fighting by the Medical Officer. His determination saved his battalion at a critical moment in the battle.

After the war Hugo Throssell became an outspoken opponent of war, for which he was widely condemned. It also meant that he found employment difficult and he fell into debt. When he tried to pawn his Victoria Cross he was offered only 10 shillings for it – such was the price of valour. He committed suicide aged forty-nine.

Meticulously researched, and beautifully written, this is a moving tale of heroism and patriotism which ended in sad and disturbing circumstances.

The author tells the story of Hugo Throssell, son of a former Premier of Western Australia, a volunteer and recipient of the award of a Victoria Cross. Highly Recommended... The account of what Throssells did to earn his VC provides a picture of the outstanding acts on the field of battle.

Top read. Years after conflict men from the great war carried their demons.

This is a well-researched biography of Hugo Throssell who won his VC at Gallipoli but who died tragically. The research is good but it's the florid prose that I tire of. Aside this, the book is first rate: a good account of a brave and ultimately tragic figure whose life is well-remembered here.

This title looks at the story of Lieutenant Hugo Throssell, who was awarded the Victoria Cross for his bravery. A fascinating book that illustrates the price of heroism which men like Throssell had to pay. Highly recommended.