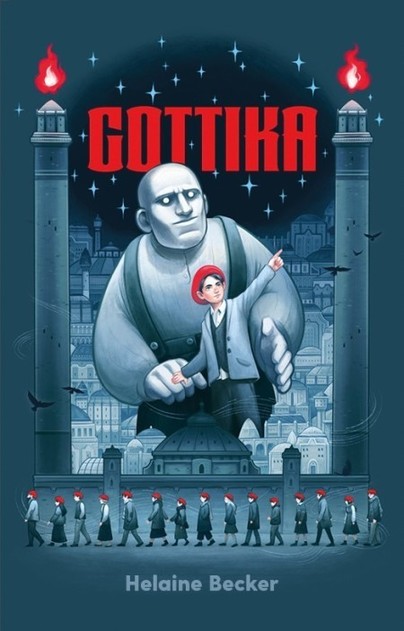 Add to Basket
Add to Wishlist
You'll be £9.99 closer to your next £10.00 credit when you purchase Gottika. What's this?
+£4.50 UK Delivery or free UK delivery if order is over £40
(click here for international delivery rates)

12 year-old, Dany lives with his father, the scholarly Rob Judah, and his silent mother Rachel in the Stoon ghetto on the outskirts of Gottika. Under the ruthless Count Pol, the Stoon community are subject to military raids, prejudicial laws and restrictions on their culture and freedom. When Pol marries Dany’s cousin Dalil to stoke further tension between Gottikans and Stoons, life gets harder still. Urged on by Dany, Rob Judah finally runs out of patience. Something must be done.

One night, Rob Judah breaks curfew and goes down to the river. Dany follows and secretly watches as his father invokes illegal Stoon magic to raise a creature, in human form, from the mud. The Gol comes to live with the family and becomes the invincible protector of the Stoons. He foils plots, prevents violence against them, and starts to bring hope and happiness back to Dany’s family. But then Rob Judah is framed for a brutal murder and thrown in Pol’s dungeon. Now it is Dany’s time to act.

With the help of Moishe, Dalil and a wolf/dog hybrid named Khan, Dany sets out to save his father and defeat Pol once and for all. Along the way, he uncovers shocking family secrets, learns where Pol’s vicious hatred of the Stoons comes from and he is gifted with an understanding of the sacred mysteries of life itself.

Compelling, clever and full of twists and turns, Gottika reimagines the powerful Golem legend as a futuristic fantasy with a universal message.

An enjoyably challenging, multi-layered read, replete with Jewish mystical ideas but also teenage energy ("How can we 'fix' the universe?" demands Dany.

Helaine Becker is the bestselling author of more than 90 books for children and young adults, including the No. 1 Canadian national bestseller A Porcupine in a Pine Tree (Scholastic Canada) and the international bestseller Counting on Katherine: How Katherine Johnson Saved Apollo 13 (Henry Holt). Her books have won multiple awards and been translated into ten languages. A New York native, Helaine has lived in Toronto, Canada for more than 20 years. She has also written Gottika for Green Bean Books.