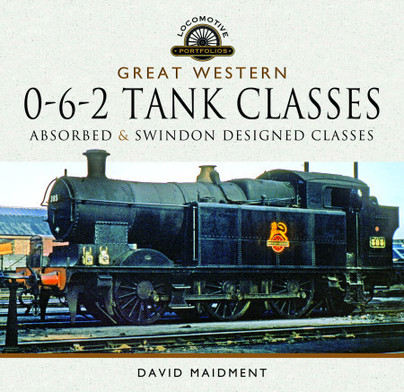 Add to Basket
Add to Wishlist
You'll be £30.00 closer to your next £10.00 credit when you purchase Great Western, 0-6-2 Tank Classes. What's this?
+£4.50 UK Delivery or free UK delivery if order is over £35
(click here for international delivery rates)

After tackling the GW pannier tanks in his ‘Locomotive Portfolios’ for Pen & Sword, author David Maidment seeks out descriptions and photographs of the GW 0-6-2 tank engines, the majority of which were built by the Rhymney, Taff Vale, Barry and other Welsh railways from the last decade or so of the nineteenth century onwards. The engines of eight different companies, absorbed by the GWR in 1922, are described and illustrated, and the way in which many were modernised and rebuilt at Swindon or Caerphilly Works in the 1920s. Charles Collett was, however, faced with a motive power crisis in the mining valleys at the Grouping, as many of the companies had economised on essential maintenance as the GW’s take-over drew near, and he had to hurriedly design a standard 0-6-2T to complement and bolster their work as the powerful GW 2-8-0Ts were too heavy and wide for many of the Cardiff valleys. These engines, the 56XX & 66XX classes, became part of the South Wales scene between 1925 and 1964, mainly running the coal traffic between pits and docks, although they dominated Cardiff Valley passenger services until the influx of BR 3MT 2-6-2Ts and GW 41XX 2-6-2Ts in 1954/5. The book has nearly 40,000 words of text and around 300 black & white photographs.

A very impressive pictorial survey of GWR and constituent company 0-6-2 tank locomotives in their many forms. Invaluable for anyone interested in the railways of South Wales. Highly recommended.

The history of Welsh railways never ceases to amaze me, always looking forward in search of innovation and improvements.

As a pictorial and historical record of the several hundred locomotives in scope it is a book that will be much appreciated by enthusiasts of steam days in Wales, as well as by followers of the author’s titles in the Pen-and-Sword “Locomotive Portfolios” series.

This is another excellent book to the normal high standard to be expected from David Maidment. While it is of particular value to those with an interest in the railways of South Wales, it should also appeal to those with a wider interest in Great Western locomotive matters.

In some ways this book is an embellishment of these [Locomotive Portfolios] books, and recommended for the avid student of loco history, particularly the photography.

This is another worthy addition to Pen & Sword’s Locomotive Profile series.

Along with huge amounts of technical details, maps, loco diagrams and several appendices, there are details of preserved locos, all of which make this book a gold mine of information and highly recommended.

The appendix takes a more technical look at several of the classes, with general dimensions and specifications accompanying a weight diagram in many cases. These are followed by allocation histories, which round off a very interesting study. Highly recommended.

All royalties go to the Railway Children charity founded by the author so as well as a thoroughly good read, your hard earned money will be supporting a worthwhile cause.