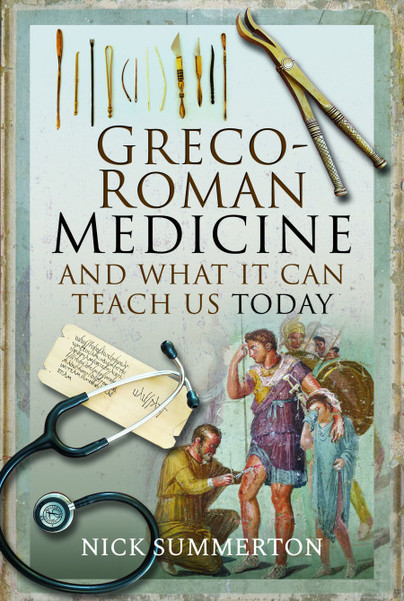 Greco-Roman Medicine and What It Can Teach Us Today (Hardback)

Preorder
Add to Wishlist
You'll be £20.00 closer to your next £10.00 credit when you purchase Greco-Roman Medicine and What It Can Teach Us Today. What's this?
+£4.50 UK Delivery or free UK delivery if order is over £35
(click here for international delivery rates)

There can be little doubt that the Romans experienced many of the illnesses that are still encountered today, and individuals have always had to decide how best to deal with their health-related concerns.

The Roman Empire was an amalgam of many cultures, often with dissimilar ideas and beliefs. The Greek impact on health was particularly dominant and, therefore, this book focuses on Greco-Roman medicine as it was practised during the Pax Romana, the period between the accession of Augustus and the death of Marcus Aurelius.

Drawing on ancient literature supplemented with evidence from archaeology, paleopathology, epigraphy and numismatics the Greco-Roman medical context is carefully examined. A particular focus is on the effectiveness of approaches to both preventing and treating a range of physical and psychological problems. Detailed consideration is also given to the ancient technical and hygienic achievements in addition to the place of healers within Roman society.

Uniquely, within each chapter, the author draws on his own clinical and public health experience, combined with modern research findings, in assessing the continuing relevance of Greco-Roman medicine. For example, Galen`s focus on access to fresh air, movement, sensible eating and getting sufficient sleep matter as much today as they did in the past. Our classical forebears can also assist us in determining the best balances between prevention and treatment, centralised control and individual responsibility, as well as the most appropriate uses of technology, drugs and surgery.

Some ancient pharmaceutical compounds are already showing promise in treating infections. In addition, practising Stoicism and getting some locotherapy should be considered by anyone struggling to cope with the stresses and strains of modern life.

Dr Nicholas Summerton qualified as a medical doctor in 1984, and has worked in hospital medicine, general practice, public health and clinical research. He has written three books on diagnosis and screening plus a short booklet entitled Medicine and Health Care in Roman Britain. He also has longstanding interests in the Roman world and a specific focus on Ancient Medicine.