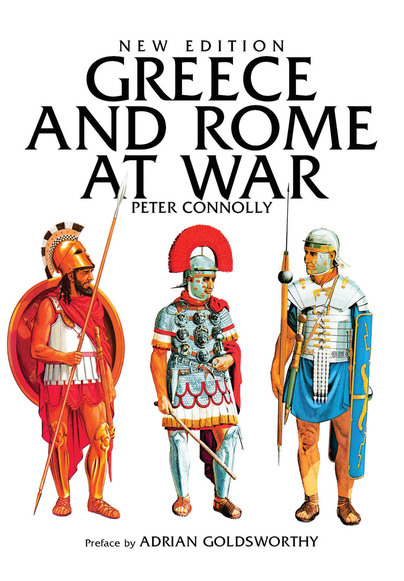 Greece and Rome at War (Paperback)

Add to Basket
Add to Wishlist
You'll be £19.99 closer to your next £10.00 credit when you purchase Greece and Rome at War. What's this?
+£4.50 UK Delivery or free UK delivery if order is over £40
(click here for international delivery rates)

Listing only one strength of the book would be like belittling it. Connolly's historical exposition (which manages to identify exactly the path taken by the Persian army to circumvent Leonidas at Thermopylae) clear and profound. The beautiful drawings of huge battle scenes, or amazingly reproduced figures. The clear diagrams that perfectly explain how the Manipular Legion or the Macedonian Phalanx moved. Again the drawings that represent the swords and other relics found in the excavations, the genealogy of the Greek or Roman-Celtic helmets etc.. Everything contributes to creating the perfect history book, useful to the historian, to the enthusiast, to the neophyte, to the model maker, even to those who do not understand anything of history and want to give birth to a love that will last a lifetime like Adrian Goldsworthy wrote in his preface.

I have owned this book about three times at least, it's a book that gets "borrowed" and never seems to reappear. That in itself is probably all the recommendation it needs I suppose. It has been in print since1981 in various forms and updated editions. This is the 2012 edition republished in 2016.

This is a lavishly illustrated must have book for anybody with the slightest interest in the period. The author and artist Peter Connolly is well known for his work in the ancient world. it covers twelve centuries so is an overview. That however doesn't mean it's skimped on, just that only the main areas receive anything like an in-depth coverage.

The illustrations are truly superb and in full colour in the main, they are a mix of photographs and paintings. If you have even the slightest interest in the period covered and this isn't on your bookshelves, I would encourage you to get a copy and given my loss rate, possibly a chain to keep it there!

The book is full of details illustrations, maps and photographs.

This comprehensive review of Greek and Roman military formations and technologies is a tour de force. The combination of clearly presented text and a very large number of commissioned full colour illustration through out the body of the book has been achieved at an incredibly low price – Most Highly Recommended

Undoubtedly, this book must have a space of honour in our library. We would not understand history without such a work.

This is another soft cover edition of a book that has already passed through CAAM's book reviews and remains a first rate study and is very good value for money.

This book has enjoyed a long publishing history – first published in 1981, reprinted in 1998 and 2012 and now republished in 2016 in paperback format. In this large format, full colour, 320 page work, the author divides the text into three main sections, Greece and Macedonia, Italy and The Western Mediterranean, The Roman Empire. Each section is then subdivided into two chapters, each in turn being further divided into a number of parts, thereby presenting a comprehensive view of the period under discussion – roughly 800BC to AD450 – and providing a great deal of information on the way. There are three appendices covering war at sea, fortifications and siege warfare, Roman military costume. This new revised edition features a preface by Adrian Goldsworthy, plus there is also a bibliography and an index.