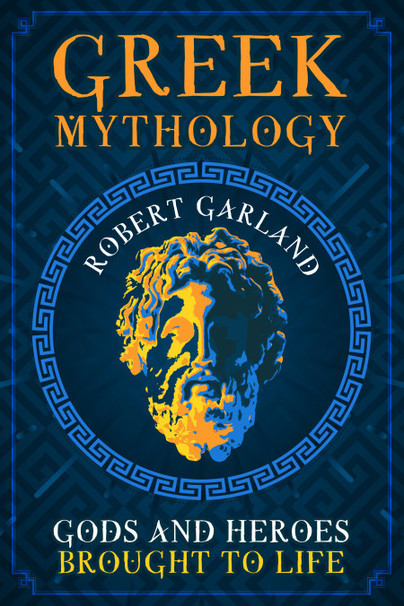 Gods and Heroes Brought to Life

Add to Basket
Add to Wishlist
You'll be £11.19 closer to your next £10.00 credit when you purchase Greek Mythology. What's this?
+£4.50 UK Delivery or free UK delivery if order is over £35
(click here for international delivery rates)

Greek mythology isn’t the equivalent of the Bible or the Qur’an. There is no standardized version of any myth. Myths aren’t sacred. Whether you happen to be Homer, Aeschylus, Sophocles, Euripides or any other Greek, or even you or me, every myth is yours to tell and interpret any way you like.

Just to give one example. An oracle has decreed that Oedipus will kill his father and marry his mother. In Homer’s version, Oedipus carries on ruling in Thebes when he discovers he has fulfilled the oracle, whereas in the version that Sophocles gives us in his play Oedipus the King, Oedipus blinds himself and goes into voluntary exile. That said, certain details are unalterable. Oedipus has to be ignorant of the fact that the man whom he kills is his father and that the woman whom he marries is his mother; he has to fulfil the awful prophecy of the oracle; and he has to come to a realisation of what he has done afterwards. But everything else is pretty much up for grabs.

Greek mythology is very much alive and well in the contemporary world. There are many narrative versions of the myths currently available, but this book will do something very different: it will give the characters the chance to tell their stories in their own words. In so doing, it will give both gods and humans the opportunity to reflect upon their life stories and, in places, justify their actions. In this way they will come across as real people, just as they are, say, in the plays of the dramatists.

Greek Mythology: Gods and Heroes Brought to Life was a very short, yet detailed and intresting read!

I was so positively surprised to hear all the stories from the gods and heroes' perspective. It was a really unique way to retell the Greek myths and this is something what I really missed in Greek myths, a very personal approach! I also found the smaller deities' stories incredibly interesting - we don't hear abobut them a lot (almost never), so that was very a fantastic decision to include them in the stories too.

The language was very colloquial and honest, but that was a big advantage of the book It made the characters' stories more personal and funny and not so dull as we usually experience in classical retellings of the myths.

The book is a fantastic choice for all the Greek mythology geeks out there! You won't be disappointed!

The lively, pithy writing brings the characters to life and the quirky illustrations are a great addition to the narrative. I am the first to admit that Greek Myths can be rather dry but this lighthearted romp is both memorable and eminently readable. The first person narrative and the fact that the Gods and Heroes featured just came out with what they were thinking was a stroke of genius. It's very much a refreshingly original take on renowned myths and an amusing read that is well worth your time if you're a fan of Greek Myths. Garland manages to simultaneously keep elements of the old whilst also bringing the stories up to date. Highly recommended.

This book is so much fun. I can't even think of it without laughing to myself. Told from the point of view of various gods and characters, "Greek Mythology" gives an interesting (and fun... Did I say fun already?!) perspective to the myths. It is brilliantly written, and I would recommend it for absolutely anyone over the age of 18. I think I'm going to go now and read this again!

It's no secret that I am a huge fan of Greek Mythology and have read so many book relating to it, so it was no surprise that I enjoyed this book.
So this is an anthology of all the Greek myths we know and love with a bit of a twist, they are all written from the point of view of the gods. A first person narrative isn't something I have come across when it comes to a collection of myths, and it was quiet a refreshing change. The changing narrative is cleverly done between each character and real personalities start to develop for each character... I also found this book very witty and I did laugh out loud at some points. Garland has done a great job of pulling in modern colloquialisms to bring these old myths into the 21st century.

All in all a great book on Greek Mythology with a funny twist.

I have always been a lover of Greek Mythology and this book did not disappoint. Any lover of mythology will most likely already know the classics but having them retold in the point of view of the Gods/Godesses/Demi-Gods point of views was a point of genius in my opinion.

A useful and memorable summary of Greek mythology, a great primer, and much less dry than Appollodorus’ Library. ⁣

I have always been interested in mythology and really enjoyed reading this book, I found it full of information and recommend to all.

I love Greek mythology, so it was kind of hard for me to not like this book. I loved the idea of telling the stories in first person, bringing us closer to the characters we know so well, but have never met this way and I appreciated the little instances of modern humour.

I've been a fan of Greek myths since I was a tween and always enjoy reading modern interpretations when they come out.

As someone well versed in Greek mythology, none of the stories here were new to me, but what I did enjoy was that each tale narrated by the goddess, god or demi-god themselves.

There are notable first person POV from Achilles and Odysseus and characters generally not as well known or famous like Psyche and Ismene, or disregarded like Penelope, long suffering wife of Odysseus.

Reading from their perspectives (as well as their snarky and amusing comments) was fun and engaging.

I also enjoyed the illustrations; they had an old school sketch vibe going on that worked well with the tone of the stories.

This would be a great introductory book for anyone unfamiliar with Greek mythology, looking for a different perspective in these incredible stories that still resonate in our modern world.

Mythology – Provides a language for exploring the meaning of life and the terms of human existence without reference to some transcendent power or overarching plan. It is the product of the culture where knowledge is transmitted orally.

This book is about Greek Mythology, but with a twist. All the Greek Gods and Heroes from Zeus, Artemis, Orion, Apollo, Hermes, Perseus, to Pan, Dionysus, Ariadne, Heracles, Prometheus, Jason, Atlanta, Achilles, Cassandra, Plato, Helen etc are brought to life.

All the characters mentioned in this book are given a chance to narrate stories in their own words. In doing so, all the Gods and Heroes are able to reflect upon their lives and talk about it from their point of view. This book presents all their narrative versions to the readers who enjoy Greek Mythology.

This book takes us through the journey of all the characters in Greek Mythology classified and Gods and Heroes. It is amazing to read from all their point of view and the author has done a lovely job in bringing all these characters to life. The book has a fine twist with illustrations from the author. In his writing, all the characters are made to feel like they are real people.

This book is very good for someone wanting to learn more about Greek mythology.

Robert Garland is the Roy D. and Margaret B. Wooster Professor of the Classics at Colgate University, where he has taught for 30 years. He attended drama school before completing his PhD at University College London. In recent years he has recorded four courses for The Great Courses and written two videos for TED Animation. Robert has published 13 academic books on both Greek and Roman history, and has recently finished a comic historical novel. His interest is in how to make history come alive and his most important contribution to the discipline has been to identify categories of people who have been generally overlooked in conventional accounts of ancient history, including the disabled and refugees.