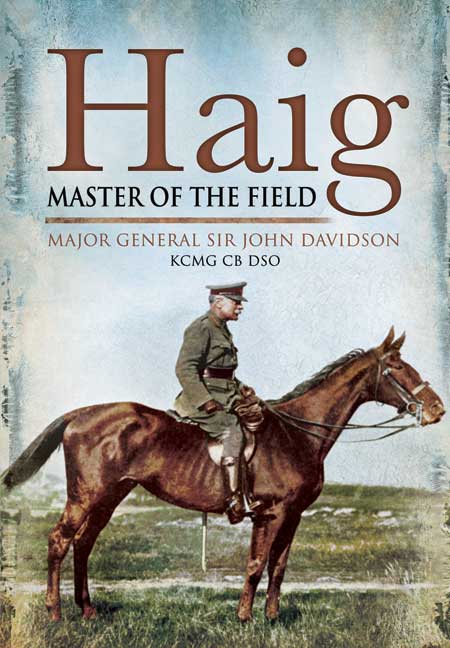 Haig: Master of the Field (ePub)

Click here for help on how to download our eBooks
Add to Basket
Add to Wishlist
You'll be £4.99 closer to your next £10.00 credit when you purchase Haig: Master of the Field. What's this?
Need a currency converter? Check XE.com for live rates

A distinguished soldier who had served in South Africa, the Author was selected to be Haig's Director of Operations in 1915, a key position he held until the end of the War. This book concentrates on the dramatic events of 1917 and 1918 and covers Third Ypres, the German onslaught (Kaiserschlacht), and the victorious 100 Days. We learn of the parlous state of the French Army, their loss of morale and the widespread mutinies.

Tavish Davidson's viewpoint on the conduct of operations was unique and we learn of the factors at play in Haig's HQ. The German U-Boat fleet's ports became a high priority as losses of shipping mounted, threatening the whole war effort. We get the German perspective – Passchendaele 1917 was even more costly for them than the Allies.

Davidson comes down wholeheartedly on Haig's side but this should not be a surprise as Haig was revered by his officers and men. It only became fashionable to pillory him much later.

This is an important addition to the bibliography of the Great War.

The author adopts detail in these various official histories to note he is in no doubt that the Flanders offensive as a whole damaged German morale and staying power, and resulted in the Kaiserschlacht of 1918 ultimately running out of steam. Within this phase of the war on the Western Front, the author is sympathetic the pressure Haig was understating that 'unfair and impossible demands and instructions were issued to the British Commander-in-Chief' with which he was not always able to comply. The chapter on the British Offensive of the autumn of 1918, like all the other sections, integrates thorough detail on the progression of battle, alongside, such as the communication between General Foch and Haig. The author emphasises what he views as a significant strength of Haig; his judgment that British morale would outlast that of Germany.

'Haig: Master of the Field' remains an absolutely essential title for the library of anyone wishing to fully grasp the British C-in-C and the British Armies in France's role in the dramatic final two years of the Great War

This is an important book in the historiography of the Great War... Haig: Master of the Field is a most interesting work.

This book makes a major contribution to the 'Haig Debate' and is an important element of the bibliography of The Great War.

A distinguished soldier who had served in South Africa, the author was selected to be Haig's Director of Operations in 1915, a key position he held until the end of the First World War. The book concentrates on the dramatic events of 1917 and 1918, and Davidson's viewpoint comes down wholeheartedly on Haig's side.

The book provides insight into Haig's character, style and contribution, as well as his relationship with the Allies.

This new edition is bound to receive wide acclaim from both students of the Western Front and seasoned military historians, as well as lay readers. Its style is refreshingly modern-sounding and concise. Additionally, there are useful sketch-maps on the back pages, which help the reader to visualise the broader sweep of strategy that the author discusses.

Overall, 'Haig: Master of the Field' represents a considered, thoughtful, and vital assessment of the command of one of Britain's foremost soldiers, Sir Douglas Haig, and his role in the victory over Imperial Germany in 1917 and 1918, by one of his closest subordinates.

Tavish Davidson was born in 1876 and commissioned into the 60th Rifles in 1896. He served in South Africa and attended Staff College in 1905. He was involved in the Haldane Reforms and planning the BEF’s deployment to France 1914.

After the War he became an MP until 1931 when he pursued his business interest. Haig: Master of the Field was first published in 1953, a year before his death.

In December 1915, Haig replaced French as Commander-in-Chief of the British Expeditionary Force (BEF), with French returning to Britain. Haig had been intriguing for the removal of French as commander of the BEF and had told King George V that French was "a source of great weakness to the army and no one had confidence in him any more".