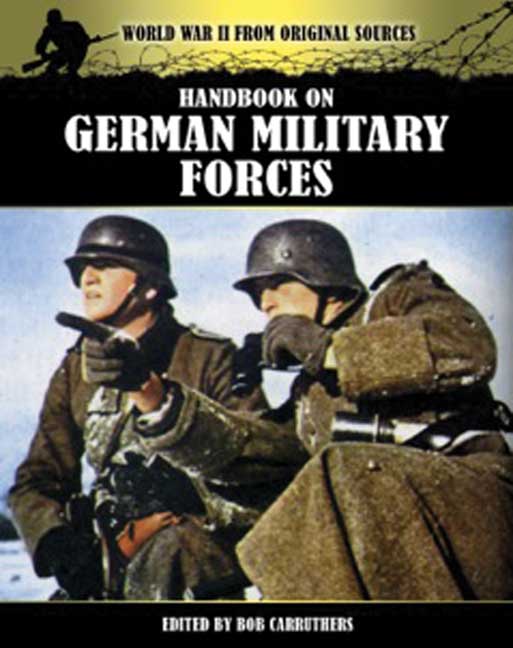 Click here for help on how to download our eBooks
Add to Basket
Add to Wishlist
You'll be £4.99 closer to your next £10.00 credit when you purchase Handbook on German Military Forces. What's this?
Need a currency converter? Check XE.com for live rates

The Handbook On German Military Forces is an indispensable primary reference source for historians and enthusiasts. In 1945 the Allies were still engaged in bitter fighting against stiff resistance from the German armies in the west. The US War Department was determined to do its best to equip the US forces fighting the Germans in the field with as much knowledge as possible. March 1945 saw the issue of an astonishing document entitled the Handbook On German Military Forces. This was a truly remarkable work of intelligence gathering which formed a vast compendium of all the relevant knowledge amassed on the German Wehrmacht.

Amazingly accurate and comprehensive, the Handbook ran to over six hundred pages and was designed to equip commanders in the field with everything they were likely to need to know about the German forces. The Handbook remained classified until 1953 and then slipped into obscurity.

The Handbook On German Military Forces is a fascinating primary reference source for historians and enthusiasts alike, providing an invaluable insight into the detail of the German Army which is still an unrivaled source of information today.

This volume was written originally by the US War Department and published in March 1945. As the title says it is a highly useful handbook to the German Forces. It has detailed chapters on the military system, organisation of field forces, other military and auxiliary forces, tactics, doctrine on fortifications and defences, supply and movement, weapons employed, equipment, uniforms and
insignia and data on the German Air Force.
I have found this book very useful on numerous occasions especially when seeking some background information. It was originally published in the war years and has some black and white photographs and artwork. It does lack colour images but such images weren’t so popular during the war and printing technology has advanced considerably since then.

This book is a reference book and it describes the construction and operation of the German forces. Each chapter is on a different aspect and they combine to make a very good overview of the might of the German forces. If you are wanting to find the structure of a division, equipment used, details of uniforms and insignia etc. then this is a very good book to start your research with. It covers a myriad
of topics and has huge amounts of details on them. As a handbook on the German forces it is simply excellent. What more can I say!