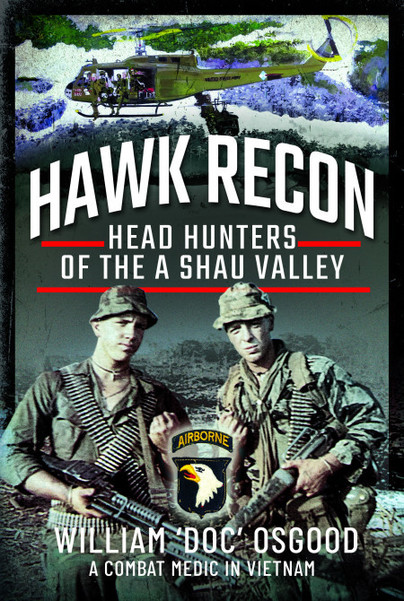 Head Hunters of the A Shau Valley

Preorder
Add to Wishlist
You'll be £20.00 closer to your next £10.00 credit when you purchase Hawk Recon. What's this?
+£4.50 UK Delivery or free UK delivery if order is over £35
(click here for international delivery rates)

It took courage and a certain sense of wild adventure to be a combat medic during the Vietnam War, and William 'Doc' Osgood exemplified their daring attitude. Doc would see combat throughout South Vietnam, spending much of his time deep in the bush far from the relative safety of base camps.

With the less than encouraging words that “you’ll be dead in 15 seconds” still ringing in his ears, Doc embarked on an eventful and at times harrowing combat tour that pitted the famed 101st Airborne Division against some of the North Vietnamese Army’s finest troops on the battlefields of the Ho Chi Minh Trail, Hamburger Hill, and the deadly A Shau Valley.

Doc would serve as the head medic with legendary Colonel Charlie Beckwith’s (creator of the US Army’s Delta Force) 2/327th, 101st Airborne Division, Hawk Recon in what was arguably one of the most dangerous jobs in the deadliest part of South Vietnam. Doc also became an unofficial combat artist during the war.

William 'Doc' Osgood graduated from "Green Berets' Special Forces school and served in the 101st Airborne and a Hawk Recon platoon as a medic during the Vietnam War. Later, he flew missions with Eagle Dustoff - air ambulance - into the A Shau Valley and Hamburger Hill. One of his commanding officers was the legendary Col. Charlie Beckwith, creator of the US Army's Delta Force.

After the war, Osgood became a bush pilot and flew aerial firefighting missions as well as not entirely legal flights at night into Mexico bringing in electronics. It paid well, but was dangerous, with several pilots losing their lives.

Osgood now lives in Hawaii where he spends his time painting and surfing.