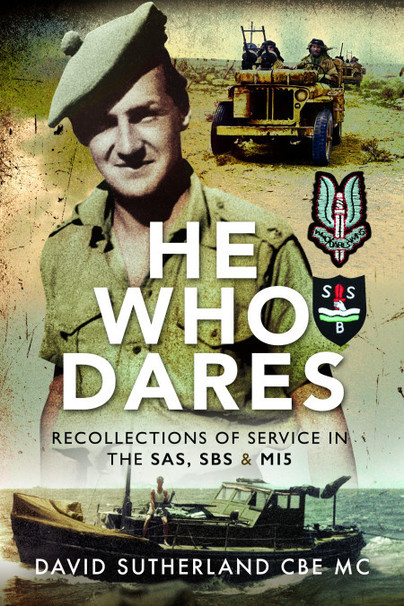 He Who Dares (Paperback)

Recollections of service in the SAS, SBS and MI5

Add to Basket
Add to Wishlist
You'll be £14.99 closer to your next £10.00 credit when you purchase He Who Dares. What's this?
+£4.50 UK Delivery or free UK delivery if order is over £35
(click here for international delivery rates)

Over fifty years having now passed since the Second World War ended, it is surprising that there are any first-hand accounts left that are worth the telling. The fact that there are, and that they have remained untold, can only be ascribed to modesty and to the fact that fifty years ago what seems to be the post-war generation to be the exclusive province of thriller writers was to David Sutherland's generation the only adult world they had ever known. It needs someone to say: "You'd better write it down before it's too late" or a grandchild to ask: "What did you do in the war, Grandpa?" to get the pen and the memory cells into gear.

David Sutherland's war certainly ranks very high indeed in the thriller ratings. If, at times, he errs on the side of modesty when describing his own role and is over-generous in his praise of others, he cannot disguise the fact that au fond he found it all thrilling - while realising that ultimately he was extremely lucky to come out alive.

Much of the action is set in the Aegean where the author served with the Special Boat Service, an off-shoot of the infant SAS, raiding airfields on the German-held islands. This is really thrilling stuff, made all the more moving by the author's profound and lasting admiration for the Greek resistance fighters who risked not just their lives, but those of their families and entire villages, by giving their support.

David Sutherland has written a true adventure story. But it is one which raises that age-old yet acutely disconcerting question: "When men have lived lives like this, what am I doing catching the 8:15 from Woking?!"

If you have any interest in Special Forces, the war in the Aegean or just to marvel at the courage and adaptability of that rare breed who fought in “non-standard” formations this is a book for you. Well written, full of detailed stories of action but also the intimate details of a young officer with all the concerns and complexities of a dangerous job with the added responsibility for other people lives. For those of us who are armchair warriors, this is essential reading of a biography from that unique breed of men.