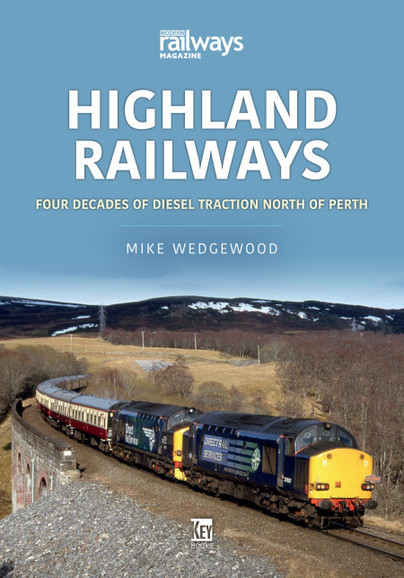 Preorder
Add to Wishlist
You'll be £12.79 closer to your next £10.00 credit when you purchase Highland Railways. What's this?
+£4.50 UK Delivery or free UK delivery if order is over £35
(click here for international delivery rates)

Set against a backdrop of the wonderful scenic beauty of Scotland’s Highlands, this book illustrates the area’s fascinating passenger and freight trains, railway infrastructure, stations and signalling over a 40-year period. Using photographs taken mainly by two railway enthusiasts who have made regular and frequent visits to the area, the reader is taken on a captivating photographic journey north from Perth to Inverness, Kyle of Lochalsh, Wick and Thurso. En route, many of the locations on the railway and the variety of locomotives and multiple units that have appeared in the area from 1979 to 2019 are shown.

This volume includes over 180 historic photographs, most of which have never been published before, each accompanied by an extensive caption. Together they form a comprehensive historic record of the trains in Highland Scotland north of Perth, including some of the changes that have taken place in the railways of the area. They illustrate the growth and decline of passenger and freight services and how the infrastructure of the railways has evolved through a period of four decades to meet the needs of the modern railway era.

Mike Wedgewood is a retired senior local government officer and a lifelong railway enthusiast. The demands of his job did not allow time for seeking opportunities to publish his work, other than regular contributions, mainly of pictures, to the magazine produced by the Class 37 Locomotive Group. Now that he has more time available, he has enjoyed the freedom to work on his books.