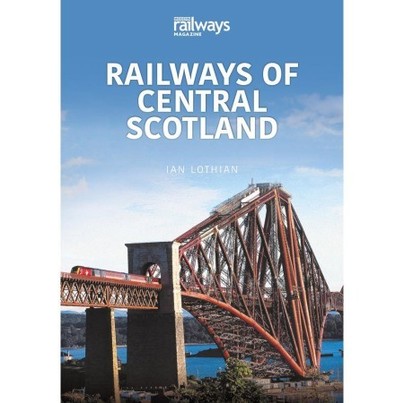 Add to Basket
Add to Wishlist
You'll be £11.99 closer to your next £10.00 credit when you purchase Railways of Central Scotland. What's this?
+£4.50 UK Delivery or free UK delivery if order is over £35
(click here for international delivery rates)

The five years either side of the millennium was a period of great change on the railway network with the advent of privatisation and, on the passenger side, the introduction of franchised operations. On the freight side, the original British Railways network was initially split into three companies – Mainline, Loadhaul and Transrail – but they all ended up being purchased by EWS, the English, Welsh and Scottish Railway. The period saw new rolling stock, new locomotives and a staggering number of different liveries.

Illustrated with over 150 colour photographs, this book records some of the many changes to the main route network in Central Scotland, capturing the last days of some of the older classes before they were phased out and, equally, documenting the new as they came in. By 2005, the railways of Central Scotland had evolved almost beyond recognition when compared with how things had been ten years earlier and in this volume Ian Lothian provides an interpretation as to how things were and how they have been transformed over a decade.

Ian Lothian attended Dunfermline High School before going on to study economics and accounting in Glasgow. After completing his further education, he joined the Civil Service, initially working on the LEO computer project. Early retirement meant he was able to spend more time on his hobby of photographing trains. Ian has had railway photographs published in magazines and publications in the UK, Canada, the USA, various European countries, Australia, New Zealand and South Africa. In 2003, he won the inaugural Photographer of the Year competition organised by Railways Illustrated magazine, one highlight of which was being asked to name Freightliner Heavy Haul's 66618 at the National Railway Museum at York.