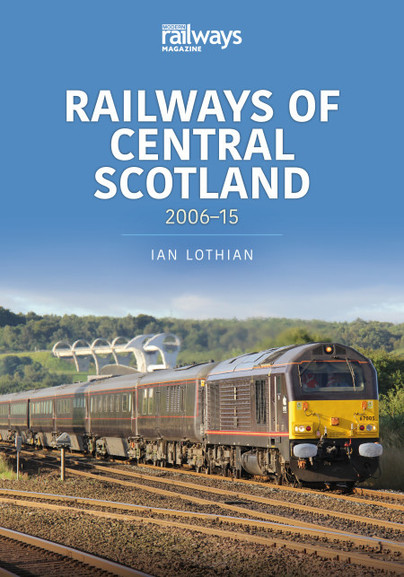 Preorder
Add to Wishlist
You'll be £11.99 closer to your next £10.00 credit when you purchase Railways of Central Scotland. What's this?
+£4.50 UK Delivery or free UK delivery if order is over £35
(click here for international delivery rates)

From the time when the first railways were built, there has been a process of constant change over the decades. The years between 2006 and 2015 saw many of these changes in Central Scotland with projects such as the rebuilding and reopening of the lines from Maryhill to Anniesland and the Larkhall branch. However, these developments seem minor when compared to the opening of the Stirling to Alloa and Kincardine line in 2008, followed by the Airdrie to Bathgate route in December 2010. These were much longer lines; the Stirling to Alloa and Kincardine line had to carry both passenger and heavy coal trains while Airdrie to Bathgate became a double-track electrified railway with new stations and a frequent passenger service. Illustrated with over 150 colour photographs, this volume looks at the transformation of the main route network in Central Scotland, over the ten-year period, detailing changing franchises, different liveries and new lines, locomotives and rolling stock.

Ian Lothian attended Dunfermline High School before going on to study economics and accounting in Glasgow. After completing his further education, he joined the Civil Service, initially working on the LEO computer project. Early retirement meant he was able to spend more time on his hobby of photographing trains. Ian has had railway photographs published in magazines and publications in the UK, Canada, the USA, various European countries, Australia, New Zealand and South Africa. In 2003, he won the inaugural Photographer of the Year competition organised by Railways Illustrated magazine, one highlight of which was being asked to name Freightliner Heavy Haul's 66618 at the National Railway Museum at York.