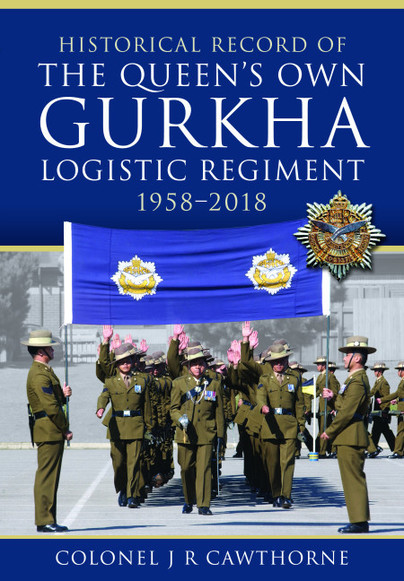 Historical Record of The Queen’s Own Gurkha Logistic Regiment, 1958–2018 (Hardback)

Preorder
Add to Wishlist
You'll be £32.00 closer to your next £10.00 credit when you purchase Historical Record of The Queen’s Own Gurkha Logistic Regiment, 1958–2018. What's this?
+£4.50 UK Delivery or free UK delivery if order is over £35
(click here for international delivery rates)

The Gurkha Army Service Corps, the predecessor of The Queen’s Own Gurkha Logistic Regiment, was raised in Singapore in 1958 ten years after the transfer of Gurkha regiments from the Indian Army to the British Army and towards the end of the Malayan Emergency. Within four years of being formed, it was committed to continuous operations in Brunei and Borneo during Confrontation with Indonesia between 1962-66. It was also redesignated the Gurkha Transport Regiment in 1965 to reflect changes to the Army’s logistic structure.

Between 1966-71, the Regiment was substantially reduced in size, along with the rest of The Brigade of Gurkhas, as Britain withdrew its forces from East of Suez. Concentrated in Hong Kong, the Regiment provided transport support to the Garrison for the next 20 years. In 1991, a composite squadron was sent to reinforce British Forces in the Gulf War after which, in preparation for the handback of Hong Kong to China, the Regiment moved to and became permanently stationed in the UK. In recognition of its past services, it was granted the royal title ‘The Queen’s Own Gurkha Transport Regiment’ in 1992.

The following two decades saw it undertake multiple operational tours to the Balkans, Iraq, Cyprus and Afghanistan as well as providing humanitarian assistance to the Ebola crisis in Sierra Leone. It also expanded both its role, to incorporate supply and catering, and size, which led in 2001 to it being redesignated to its current title ‘The Queen’s Own Gurkha Logistic Regiment’.

This history records the events and activities of the Regiment during its first 60 years of service to the Crown. While of wider interest to military historians, it is principally written for members of the Regiment, past, present and future.

Richard Cawthorne joined the Gurkha Transport Regiment in 1969, having spent the previous three years with 28 Commonwealth Infantry Brigade in Malaysia where he first came into contact with the Gurkha soldier, and served with 28 Squadron in Hong Kong. He was posted to the British Gurkha Transit Camp, Calcutta in 1972, which included an emergency tour at the British Gurkha Depot in Dharan, Nepal. He returned to Hong Kong in 1979 to command 28 Squadron at the height of anti-illegal immigrant operations.

His tours in India and Nepal had kindled a keen interest in the history of Gurkhas in British service, which eventually led to him being invited to be a Trustee of The Gurkha Museum and subsequently its Chairman. He has written a number of articles on Gurkha service to the Crown including a short history of The Queen’s Own Gurkha Logistic Regiment.