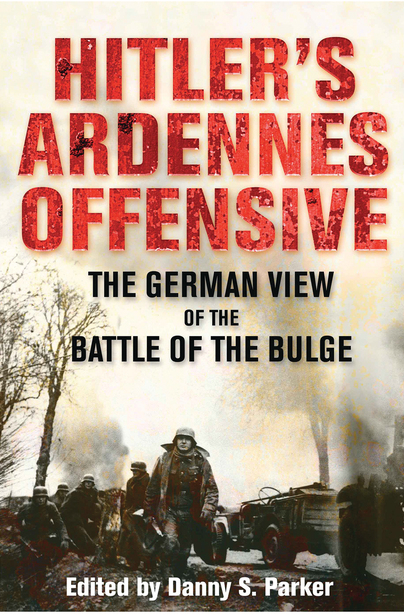 The German View of the Battle of the Bulge

Add to Basket
Add to Wishlist
You'll be £9.09 closer to your next £10.00 credit when you purchase Hitler’s Ardennes Offensive. What's this?
+£4.50 UK Delivery or free UK delivery if order is over £35
(click here for international delivery rates)

Hitler's Ardennes Offensive - known to the Germans as Wacht am Rhein and to the Allies as the Battle of the Bulge - was intended to turn the course of the war in Germany’s favour. The ferocity of the offensive took the Allies by surprise and it has gone down in history as one of the most significant campaigns of the war.

Many accounts of the battle have tended towards the perspective of the Allied victors, lacking first-hand detail about German intentions and operations. This book, however, vividly recounts how Hitler and his generals perceived the progress and ultimate failure of their final great assault. In this impressive volume, historian Danny S. Parker has brought together many rare documents representing the views of all the major personalities within the German army headquarters. These include Oberstgruppenführer Josef Dietrich and Generalmajor Fritz Krämer, General Hasso von Manteuffel, Generalfeldmarschall Wilhelm Keitel and others.

Everything from preparations for the offensive, to attitudes during the campaign and after it was brought to a close are covered, providing a fascinating and invaluable record of the German perspective - essential for a balanced view of the battle.

This is an invaluable source for the battle of the Bulge, giving the views of most of the highest ranking officers involved in the battle while it was still fresh in their minds, and before those who survived had begun to re-write events in their own minds.

This second book from the same stable [see 'Battle of the Bulge, a German view' reviewed earlier] follows on to deal with the period of attack and its ultimate failure. I felt a privileged and fascinating insight into the Battle of the Bulge. I particularly valued the detail about the attempts to take Bastogne. I have come to realise that the seemingly exaggerated American accounts of the 'glorious defence' are neither exaggerations nor understatements. The book suffers from the same fault as its predecessor in being short on maps, the reader needs a fairly large scale map to fully understand the detail of the manoeuvres. Reading with a map really rewards the effort. Our view is that this a very good piece of work by the editor and is thoroughly recommended to all who who wish to gain greater insights into the Second World War in Europe.

The author has collected together and sensitively edited
the thoughts and recollections of the key German Leaders. This exposes
attitudes and capabilities of the German commanders and military
leaders. In the process it does much to demonstrated why the Germans
failed in the Battle of the Bulge and in the war. Extremely interesting
and informative.