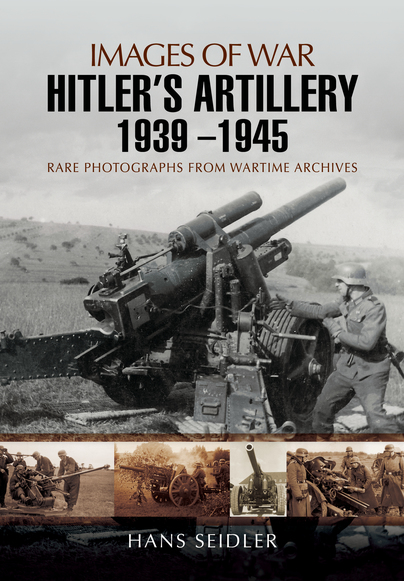 Hitler's Artillery 1939 – 1945 is a highly illustrated record of the firepower of the German war machine between 1939 – 1945. Many of the photographs, all from the author's collection, come originally from the albums of individuals who took part in the war.

The images and text cover the guns in service with the Wehrmacht and Waffen-SS and provide a unique visual record of artillery pieces. These include the 7.5cm 1.IG18, the 10.5cm infantry gun, the powerful 15cm field howitzer, heavy 18cm and 21cm mortars and others including captured French, British and Russian guns.

These and other weapons are seen in action in Poland, the Low Countries, France, Balkans, North Africa, Italy and, of course, Russia. Initially a key part of the Blitzkrieg offensive concept. The emphasis became defensive as the tide turned against the Germans. Using over 250 rare and unpublished photographs together with detailed captions and accompanying text, this book provides a unique insight into German weaponry from early Blitzkrieg campaigns to the final demise of the Nazi empire.

This is an important addition to a very popular series of books that feature lavish illustration with rare photographs. The German Army depended heavily on artillery, as did other contemporary armies. This new addition to the famous IoW series provides an excellent view of German artillery pieces of WWII and their accompanying troops and accessories. Outstanding rare photographs and concise text – Most Recommended.

This is another volume in the Pen and Sword's excellent Images of War Series. Hitler's Artillery 1939-1945 is a highly illustrated record of the firepower of the German was machine. Many of the photographs, all from the author's collection, come originally from the albums of individuals who took part in the war. The images and text cover the guns in service with the Wehrmacht and Waffen-SS and provide a unique visual record of artillery pieces.

Hitler’s Artillery 1939-1945 presents the reader with a tremendous amount of rare photographs from the wartime archives of Hitler’s artillery. The book contains 159 pages of high quality prints. Each page contains one or two photographs totally more than 550. The best thing about this book is the highly detailed and informative captions following each picture presenting the reader with a wealth of information and the plastic modeler a huge repertoire of fine ideas for a diorama.

This highly illustrated book covers all the theatres of WWII from Poland to France, the Low Countries, Russian and the Balkans showcasing the Wehrmacht’s artillery machines and the men operating them.

I highly recommend this pictorial reference book to anyone interested in the subject and particularly to the enthusiastic modeler.

Pen and Sword’s “Images of War” is a series of books that publish, often for the first time, rare photographs from wartime archives. It would be reasonable to expect that more than 70 years on from the events of World War II there was very little that remains unpublished, however the latest in the series; Hitler’s Artillery is full of rare archive photographs that are being published for the first time.

The highly illustrated book has four chapters that cover: “Divisional Artillery”; “Divisional Infantry Artillery”; Divisional Anti-tank Artillery” and “Divisional Anti-aircraft Artillery.” Each chapter has a short narrative that sets the scene followed by numerous black and white photographs of the subject with each photograph accompanied by a short caption. There are around 250 rare photographs that provide a unique record of the artillery used by the Wehrmacht and Waffen-SS throughout World War II mainly in training and on the Eastern Front.

Throughout the book there are many portraits of the troops that manned the guns. Many show smiling faces during training or rest periods at the front but others show the guns in action and the tension etched in the faces of the men is palpable. This book shows these heavy weapons being used for training and on the move and also in action. Diorama builders will find great value in the many pictures of crews both at play and fighting.

In conclusion-another winner from Pen and Sword. It is authoritative and at times intimate insight into German artillery and the crews that manned these guns. Model makers, wargamers and Second World War historians will find many new photographs here and for someone new to the subject this is a great introduction. Highly recommended for all interested in German artillery used in World War II.

An impressive array of over two hundred photographs of the powerful range of artillery used by the Germans throughout the Second World War. It is divided into four chapters; the first two dealing with divisional and infantry artillery, almost universally focused on the 105 and 150mm calibres together with a few 75's, with the last two chapters looking at anti-tank and anti-aircraft guns. The Pak 35/36, 38 and 40 feature heavily in the former with a broad selection of FlaK guns in the latter, although both naturally feature extensive coverage of the famous and much-feared 88mm. As usual with the "Images of War" series, all the photographs are large, clear, and accompanied by detailed explanatory notes. They also show each weapon being used by the Wehrmacht and SS in a variety of situations; in training or on active service in Poland, Western Europe, North Africa and Russia; on the move aided by a mixture of transport, or in action, dug-in and camouflaged.

The first section includes lots of pictures of the 105mm FH18 in barracks, in action and along with horse drawn gun teams. In use in Europe, the Eastern Front and North Africa, is a variety of uniforms and equipment with the crews as well. Also featured in this section are the larger 150mm sFH18. Chapter 2 has a lot more pictures of the heavy sFH18, along with the SIG33 Infantry gun plus the smaller 73mm le IG18. The next chapter includes images of the 5cm Pak 38, the 75mm Pak 40 and also includes the 88mm Flak 36. The 88 then features again in the final chapter on anti-aircraft weapons, along with both 20mm and 37mm guns as well.

The mix of images all in the one place is good, and there is lots of close-up detail to interest modellers, both with the equipment on the guns themselves, but with the uniforms and equipment of the crews as well. A useful collection that has been assembled to create another in this very popular series from Pen and Sword.