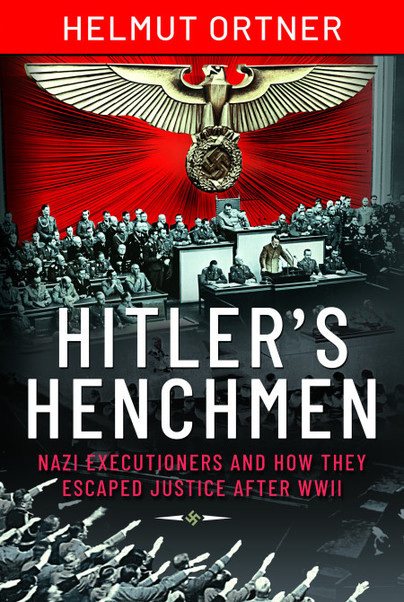 Nazi Executioners and How They Escaped Justice After WWII

Preorder
Add to Wishlist
You'll be £20.00 closer to your next £10.00 credit when you purchase Hitler's Henchmen. What's this?
+£4.50 UK Delivery or free UK delivery if order is over £35
(click here for international delivery rates)

Helmut Ortner reveals a staggering history of perpetrators, victims and bystanders in Hitler’s Germany. He explores the shocking evidence of a merciless era – and of the shameful omissions of post-war German justice.

Johann Reichhart was a state-appointed judicial executioner in Bavaria from 1924 until the end of the war in Europe. During the Nazi era, he executed numerous people who were sentenced to death for resisting National Socialism, including many of those involved in the 20 July 1944 bomb plot on Adolf Hitler.

As a member of the SS-Totenkopfverbände, the SS organisation responsible for administering the concentration and extermination camps, Arnold Strippel served at a number of locations during his rise to the rank of SS-Obersturmführer. These included Natzweiler-Struthof, Buchenwald, Majdanek, Ravensbrück and Neuengamme, where he was responsible for murdering the victims of a series of tuberculosis medical experiments. Like Reichhart, Erich Schwinge was also involved in the legal sphere during the Third Reich. A German military lawyer, in 1931 he became a professor of law and, from 1936, wrote the legal commentary on German military criminal law that was decisive during the Nazi era.

Aside from the part they played in Hitler’s regime, these three men all had one further thing in common – they survived the war and restarted their careers in Adenauer’s Federal Republic of Germany.

In Hitler’s Henchmen, Helmut Ortner uncovers the full stories of Reichhart, Strippel, Schwinge and others like them, Nazi perpetrators who enjoyed post-war careers as judges, university professors, doctors and politicians. Had they been gutless cogs in the machinery of the Nazi state, or ideologized persecutors? Ortner reveals that it was not only their Nazi pasts that were forgotten, but how the suffering of the victims, including resistance fighters such as Georg Elser and Maurice Becaud, and their relatives was suppressed and ignored.

Born in 1950, HELMUT ORTNER has written over thirty books, mostly political non-fiction books and biographies. His previous works include biographies on Georg Elser, The Lone Assassin: The Incredible True Story of the Man Who Tried to Kill Hitler, and Roland Freisler, Hitler’s Executioner: Judge, Jury and Mass Murderer for the Nazis. Many of his books met with a great response from readers and critics alike and, between them, have been translated into fourteen languages. Helmut works and lives in Frankfurt and Darmstadt. He is a member of Amnesty International and the Bruno Giordano Foundation. For more information, please see: www.helmutortner.de