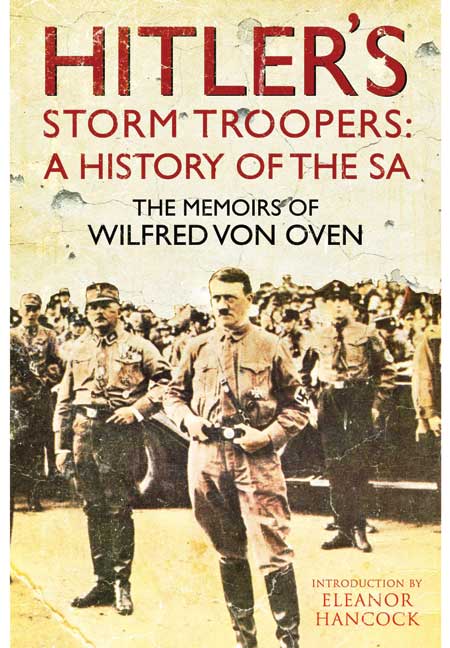 Hitler's Storm Troopers: A History of the SA (Hardback)

The Memoirs of Wilfred von Oven

Add to Basket
Add to Wishlist
You'll be £19.99 closer to your next £10.00 credit when you purchase Hitler's Storm Troopers: A History of the SA. What's this?
+£4.50 UK Delivery or free UK delivery if order is over £35
(click here for international delivery rates)

In the Nazi rise to power a key role was played by
the Nazi storm troopers –the SA. This was a paramilitary organization designed for defence of Nazi Party meetings and attacks on its political opponents. It formed the workforce for Nazi political activity in the lead up to the takeover of power in 1933. Despite its pivotal role until 1934, when it was purged and rendered politically powerless by Hitler, the SA has been surprisingly understudied by historians.
Wilfred von Oven's Nazism was linked with the career of Josef Goebbels, both as propaganda minister and as Nazi party regional leader of Berlin in the early 1930s. Von Oven's experience was of the SA in Berlin, perhaps the most extreme of the SA branches. The book is most valuable when it recounts von Oven's own experiences in the SA, his own views at the time and his personal encounters with Goebbels.
This fascinating history is an unapologetic defence of the SA against postwar revelations – the author presents a strongly pro-SA point of view. Von Oven remained unrepentant to the end: indeed, not long before his death he described his experience of Nazi rule as 'paradise'.

Hitler enthused about it in Mein Kampf. It spawned men like Kasche, Hildebrandt and Kurt Daluege, all three later condemned to death for war crimes. And yet, despite this, the SA has received rather less attention than might be expected. In this Memoir, published for the first time in English, Wilfred von Oven puts forward his own interpretation of the story of the Brown Battalions. Von Oven (1912-2008) is generally remembered for his role as Press Aide to Joseph Goebbels at the Ministry of Propoganda, a position he occupied for the last two years of the war. But he was once himself a member of the Berlin SA, and long after the war would return to Germany from self-imposed exile to interview several surviving members of the organisation for the purposes of his research, among them Prinz zu Schaumburg-Lippe and Meinhard Marnitz, the last living SA General. This yields interesting results.

The author traces the early development of the SA in the 1920s and 1930s, and its role in terms of the strong-arm tactics of the Nazi movement. From this it would seem that the intensity of the violence in clashes with the Communists may have been greater than previously imagined. He has much to say about the Stennes Revolt of 1930 and the collision course that developed between Ernst Roehm and Adolf Hitler, and singles out the man he holds responsible for the flare-up in 'The Knight 0f The Long Knives' of June, 1934. Surprisingly, it isn't Roehm (see p 148). Brief biographical details of the dramatis personae are provided, and those relating to the early life of Roland Freisler later to achieve notoriety as the hanging judge in Hitler's so-called Peoples Court are astonishing. Intriguingly, there are accounts of courtroom dramas from before, during and after the period of The Third Reich which directly or indirectly concerned the SA: we discover that Roehm was prosecuted long before Hitler came to power; how one woman launched a daring law suit against the Nazis with Hitler still in power, and about some audacious postwar litigation brought by an ex-SA man against the then West German Government. Another surprise is a hitherto unknown episode concerning action taken by the Catholic Church against Hitler himself, for unexpected reasons.

Wilfred von Oven lived out his days in Latin America, remaining loyal to the very end to the man he called his Fuhrer. We must bear in mind that the meanings he attaches to words like loyalty and idealism have other, quite different connotations to those we normally apply. The Memoir he left behind remains an important source, provided we approach it with awareness of his ideological agenda and a degree of caution. It will prove of value to students and historians alike, or indeed a wider readership wanting to understand the conflicting political currents and jostling for power that went on within this most volatile and dangerous organisation, proceeding from the pen of one who was there.

When most people think of Hitler's Storm Troopers they are most likely to picture the SS in their grey uniforms goose stepping their way across Europe, however The Memoirs of Wilfred Von Oven describes the conveniently forgotten and understudied SA or Sturmabteilung as they were known. In the Nazi rise to power the SA were utilised by Hitler to protect his Nazi Party Meetings and apply the necessary pressure to their political opponents. Wilfred Von Owen was only a member of the SA for a year before he was forced to leave in the aftermath of a revolt in Berlin but despite this he remained a loyal supporter of Hitler and National Socialism throughout the rest of Nazi rule and indeed his life. His memoirs are an unabashed and unapologetic walkthrough of these political sympathies and his interactions with prominent members of the Nazi party such Joseph Goebbels for whom he worked as a personal press adjutant. Published for the first time ever in English, the book ultimately gives an insight into the inside of one of the most fascinating yet horrendous periods in history.

A fascinating history of Oven's experiences of Nazism and an unapologetic defence of the SA against post-war revelations.

There are many books which cover the pivotal events of the Second World War, and indeed the Nazis' actions therein, however the role of the SA, 'Hitler's Storm Troopers', is relatively understudied and unknown, despite it being key towards the Nazi rise to power in the early 1930s. This book aims to provide new insight into a paramilitary organization designed to defend Nazi party meetings and attack political opponents, something which the author is well-qualified to detail upon. Wilfred von Oven was himself a member of the SA and, given his lack of repent even up to his death in 2008, it is perhaps unsurprising yet necessary to comment that these memoirs present a pro-SA and indeed pro-Nazi point of view. While this may seem controversial it cannot be denied that this angle therefore provides fresh insight to fascinate those interested in World War II history and especially the events leading up to it. Oven's own role in these events was actually relatively brief but his close links with Joseph Goebbels as propaganda minister and as the Nazi party's regional leader of Berlin (said to be the most extreme of the SA branches) at such an important time makes for fascinating reading. Whatever his views, Oven's intrinsic role in the SA cannot be questioned and certainly makes these memoirs valuable to those keen to understand the Nazi regime.