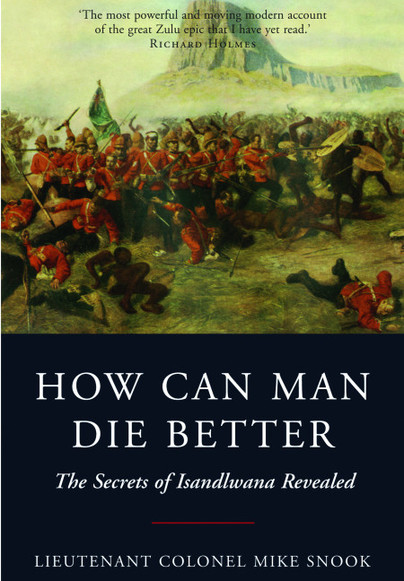 How Can Man Die Better (Paperback)

The Secrets of Isandlwana Revealed

Preorder
Add to Wishlist
You'll be £12.79 closer to your next £10.00 credit when you purchase How Can Man Die Better. What's this?
+£4.50 UK Delivery or free UK delivery if order is over £35
(click here for international delivery rates)

Wednesday 22 January 1879 was one of the most dramatic days in the long and distinguished history of the British Army. At noon a massive Zulu host attacked the 24th Regiment in its encampment at the foot of the mountain of Isandlwana, a distinctive feature that bore an eerie resemblance to the Sphinx badge of the outnumbered redcoats. Disaster ensued. Later that afternoon the victorious Zulus would strike the tiny British garrison at Rorke's Drift.

How Can Man Die Better is a unique analysis of Isandlwana – of the weapons, tactics, ground, and the intriguing characters who made the key military decisions. Because the fatal loss was so high on the British side there is still much that is unknown about the battle.

This is a work of unparalleled depth, which eschews the commonly held perception that the British collapse was sudden and that the 24th Regiment was quickly overwhelmed. Rather, there was a protracted and heroic defence against a determined and equally heroic foe. The author reconstructs the final phase of the battle in a way that has never been attempted before. It was to become the stuff of legend, which brings to life so vividly the fear and smell the blood.

The narratives are greatly compelling, being as enjoyable to read as they are to study.Recommended without reservation

Heavily recommended to military historians, scholars, and even those purely with an interest in military history alike, this book sets a milestone for all accounts of the unprecedented events which took place between Britons and Zulus that need never have taken place at all. Wednesday 22 June 1879 played host to one of the most intriguing and dramatic battles involving the British Army, which saw the 24th Regiment attacked in its camp at the foot of the Isandlwana mountain. Enthralling, unique, meticulously researched, extensively illustrated, and most of all moving, this book highlights the embodiment of fortitude and competence of the British Army. A real page-turner for anyone intrigued by this extraordinary battle, and a must for anyone's bookshelf.

This excellent book repays careful reading. One to commend very highly to the military historian, a unique study of a battle that need never have happened, and whose results were far reaching for the victors and losers both.  Not to be missed…

This book is a wonderful tribute to the courage and professionalism of our Army, and to 'the majesty with which the British soldier fights.' I highly commend it, and await with great interest the promised successor book about Rorke's Drift.

Is this a recommendation to add this title to your bookshelves? Most definitely yes.

A riveting, exhaustively researched, and highly convincing new account that overturns longstanding theories while clearing much fertile ground for further new investigation, How Can Man Die Better is a triumph of the military historian’s art and a fitting tribute to the brave fighting men of both the British Empire and Zulu Nation. As Lt. Col. Snook eloquently remarks in the prologue to this extraordinary book, “so long as courage and self-sacrifice are held in high regard, men will tell this story.”

This is probably the definitive and irrefutable work on Isandlwana and is highly recommended for the infantryman's eye, the detailed and scholarly research, the annotated photographs of the terrain, the extensive picture gallery of personalities involved, the orders of battle, the escapers and the glossary. This reviewer looks forward to Colonel Snook's next book Like wolves on the fold, which is about Rorke's Drift.