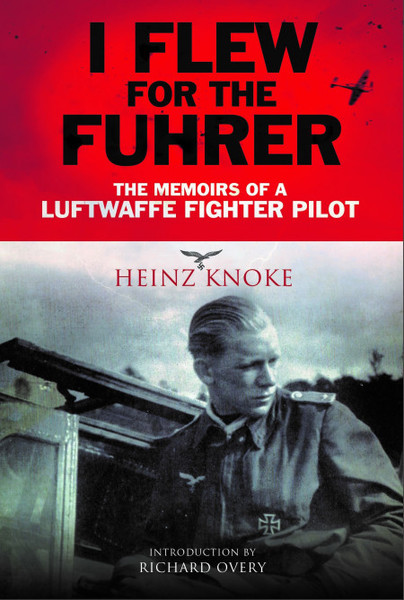 I Flew for the Führer (Paperback)

The Memoirs of a Luftwaffe Fighter Pilot

Add to Basket
Add to Wishlist
You'll be £10.50 closer to your next £10.00 credit when you purchase I Flew for the Führer. What's this?
+£4.50 UK Delivery or free UK delivery if order is over £35
(click here for international delivery rates)

Heinz Knoke was one of the outstanding German fighter pilots of the Second World War. This vivid first-hand record of his experiences has become a classic among aviation memoirs and is a fascinating counterbalance to the numerous accounts written by Allied pilots.

Knoke joined the Luftwaffe on the outbreak of war, and eventually became commanding officer of a fighter wing. An outstandingly brave and skilful fighter, he logged over two thousand flights and shot down fifty-two enemy aircraft. He had flown over four hundred operational missions before being wounded in an astonishing 'last stand' towards the end of the war. He was awarded the Knight's Cross for his achievements.

In a text that reveals his intense patriotism and discipline, he describes being brought up in the strict Prussian tradition, the rise of the Nazi regime and his own wartime career set against a fascinating study of everyday life in the Luftwaffe. He also reveals the high morale of the force until its disintegration.

His memoirs are both a valuable contribution to aviation literature and a moving human story.

Although I am no fan of nazism to say it the least, I Flew for the Führer was still a fascinating read considering that it was informative about how it was to be a pilot on that side of the war.

I found the 6+ hours I spent reading this 236-page memoir from WWII very interesting. I have only come across a few books in English written from the Axis point of view. They give a different perspective on the War. I give this book a 4 out of 5.

All in all, this book is a fantastic account from a soldier luckier than most, led by his own convictions, and is something I can thoroughly recommend to those who are interested in memoirs and World War 2 experiences. 5 stars

An excellent biography from one the the German WW2 aces. He does an excellent job of telling his story and making you feel as if you are there. His descriptions of the dog fights are gripping. A must read book for air warfare enthusiasts.

Once I started reading this book I could not put it down. I never read such a story. From the German point of view it tells a tale I didnt know existed. The early war years are descibed and what drove Germany to war. The news he tells is not what I learned in any history book.. That said the action and details given made me feel like I was there in the cockpit dueling with American and British planes. The luck and bravery of this man cannot be doubted after reading his story. The shear number of kills by Knoke proves his flying skill and cunning. One very remarkable piece of history I took away from this book was the use of air to air bombs by the Germans during the war. I never ever heard of this but they dropped bombs that exploded in mid air against the bomber formations. This book is anything but boring . If you want to read a military tale from the German side of the war this book will not hold back.