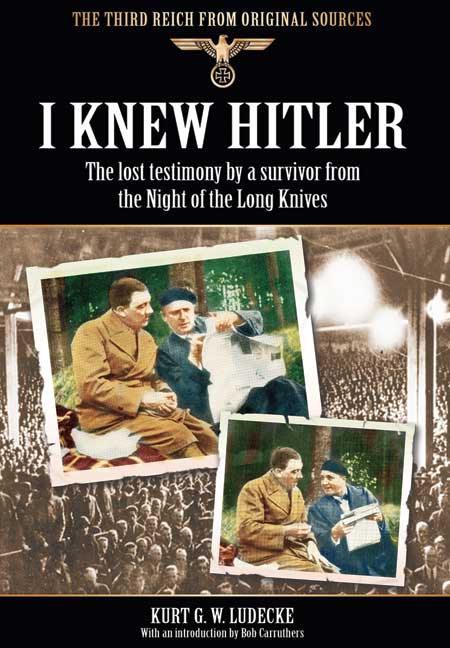 Add to Basket
Add to Wishlist
You'll be £19.99 closer to your next £10.00 credit when you purchase I Knew Hitler. What's this?
+£4.50 UK Delivery or free UK delivery if order is over £35
(click here for international delivery rates)

First published in 1938 “I Knew Hitler” is the missing link in the literary trail which traces the fortunes of Adolf Hitler from Linz to Berlin. There are surprisingly few personal accounts of life with Hitler from inside the inner circle during the years before he seized power and besides Goebbels' diaries Ludecke is by far the most important of them.

Dedicated by its author to the memory of Ernst Roehm, the publication of this brand new edition means that Ludecke's explosive memoir is back in print for the first time in 75 years. Kurt Ludecke was a former confident of Hitler's who had the misfortune to find himself on the wrong side of the political gulf which led to the 1934 blood purge better known outside of Germany as “The Night Of The Long Knives.

As the power struggle between the SS and the SA threatened to engulf him, Hitler finally took decisive action and was personally involved in the vicious in fighting which saw the arrest and execution of many senior SA figures including Roehm
himself. Ludecke was a man in the wrong place at the wrong time and was actually incarcerated twice on Hitler's orders before finally escaping to Switzerland.

For many years this fascinating and highly readable account of life with Hitler's inner circle was dismissed by the academic world as a heavily biased and therefore unreliable as a main primary resource. However a number of recent scholarly assessments have confirmed what most historians suspected all along; Ludecke is in fact an excellent and highly reliable original source. The rehabilitation of Ludecke is a timely development as he provides the only detailed account surrounding the actions of Adolf Hitler into the world of Adolf Hitler as he took the first steps from Landsberg prison to achieve power through the horse trading following the ill starred election of 1933.

Ludecke also throws a powerful new light on the events of the Night Of the Long Knives and gives the clearest indication that we have today that there was indeed a genuine SA plot to overthrow Hitler and set the party on a more rigorous route towards a truly National socialist state. Ludecke is indispensible reading for anyone with an interest in the political history of the Third Reich.