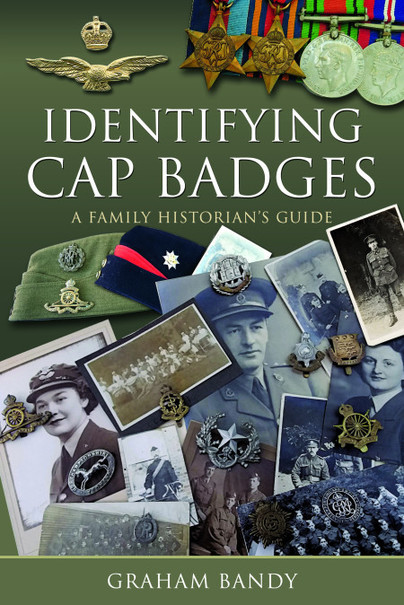 Add to Basket
Add to Wishlist
You'll be £20.00 closer to your next £10.00 credit when you purchase Identifying Cap Badges. What's this?
+£4.50 UK Delivery or free UK delivery if order is over £35
(click here for international delivery rates)

This book is an invaluable ‘tool of the trade’ for anyone trying to identify or interpret photos. – Peter Hart, Military Historian

This fascinating and impressively-researched volume will become an invaluable resource for all on a quest to find out about family members who served as well as those who have a fascination with the details of British military history. - Col. Richard Kemp CBE former military head of COBR and commander British Forces, Afghanistan

Identifying Cap Badges is the book that has been missing from the bookshelves of family historians, military enthusiasts, and badge collectors alike.

It is quite easy to find an erudite book on military cap badges, but you could spend hours, if not days, plodding through hundreds of pictures to find a match for the one you hold. Sometimes you may not find it at all!

These learned badge collector's books have one major flaw; they are pictured and discussed in 'order of precedence', that is to say, from the earliest formed regiments to the latest, with separate sections on medical, engineers, cavalry, infantry, etc. This can be most confusing to those uninitiated into the 'dark arts' of military badges. Thus, if you do not know the name or 'original number' of your regiment in this order of precedence, you can be flummoxed! This, combined with all the different crowns, laurels, animals, mythological beasts and castles, can prove more than a little daunting, even to ex soldiers themselves!

In this book you will find badges ordered by what is on the badge itself; be it a dragon, sphinx or castle, horse, lion or tiger. This is badge identification in minutes, rather than hours, with added information on dating badges and many comparison photographs alongside all the pictures of the badges. Added to these pictures are short histories of the regiments and 'family trees' plotting the antecedents of today's units.


This is a great book to add to the bookstore of genealogist both professional and amateur a like. I found it very informative myself.

There are actually 1290 photographs in this book!

This is a labour of love that easily finds the badge you are trying to match. Totally different, and an adjunct to the learned tomes such as Gaylor and Kipling and King.

Graham Bandy has spent most of his life in the army, nursing, or both. He has been identifying military badges since he was at school, and is now a much sought after asset at both county and national family history fairs, such as WDYTYA Live and Family Tree Live and has also appeared on BBC's WDYTYA. Graham also gives many talks and lectures on the subject of badge and photographic identification and sits on the Heritage Committee of the QARANC Association. He is married and lives in Sussex with his wife and an ever growing collection of militaria and military photographs, under which they are both slowly drowning.