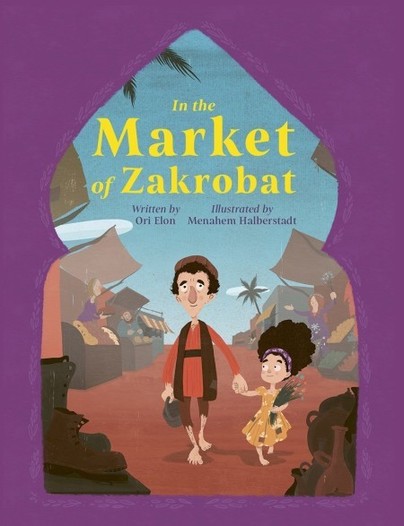 In the Market of Zakrobat (Paperback)

Preorder
Add to Wishlist
You'll be £7.99 closer to your next £10.00 credit when you purchase In the Market of Zakrobat. What's this?
+£4.50 UK Delivery or free UK delivery if order is over £35
(click here for international delivery rates)

Baltosar lives in a giant fortress in the town of Zakrobat. Despite owning thirteen boxes of gold, he prides himself on how frugally he lives.

Yosef, Baltosar’s neighbour, is a hardworking cobbler who lives in poverty. Yet, every Friday, he goes to the market to buy something special for Shabbat. Yosef is famous for his festive Shabbat meals.

One night, Baltosar dreams that his boxes of gold grow feet and run away to Yosef. He wakes up screaming in terror and vows that Yosef will never have a penny of his great fortune. He comes up with the perfect scheme to keep his riches safe, or at least safe from Yosef, but things don’t quite go according to plan.

Told with humour and a lightness of touch, this classic fable of a miser’s comeuppance celebrates generosity of spirit and the joy of Shabbat as all the riches a person needs.

Ori Elon is an award-winning Israeli filmmaker and writer. He is the author of Invisible Show, which won the Israeli Ministry of Culture Best Novel award. He has written several children's books including, The Chickens That Were Turned Into Goats and King Gogle. He is the co-creator and writer of the critically acclaimed television drama Shtisel, which won 17 Israeli Academy Awards. He was one of the writers of the drama series Srugim, the mini-series Autonomous and the comedy The Choir.

Menahem Halberstadt studied painting and drawing under the instruction of the famous Israeli artists Leonid Balaklav and Aram Gershuni. Following this, he studied animation at the Bezalel Academy and graphic design at Hadassah Academic College, Jerusalem. He works as an illustrator with a number of publishing houses in Israel and lives in Israel with his wife and four children.