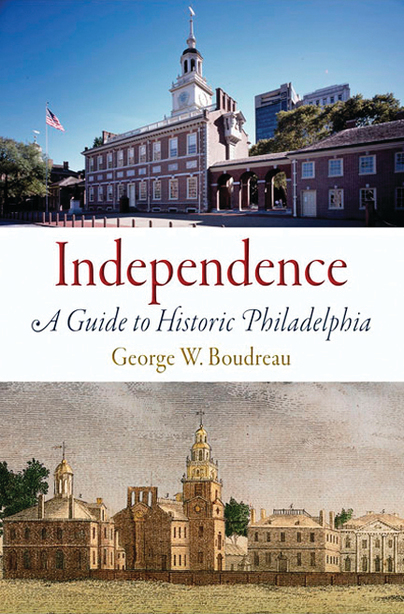 A Guide to Historic Philadelphia

Add to Basket
Add to Wishlist
You'll be £14.99 closer to your next £10.00 credit when you purchase Independence. What's this?
+£4.50 UK Delivery or free UK delivery if order is over £35
(click here for international delivery rates)

With More than 250 illustrations and Engaging Stories, an Essential Historical Guide to the Birthplace of America, Now a World Heritage City

"This guide book provides both Philadelphians and visitors with an accessible narrative of the latest research on what is often called 'the most historic square mile in America."-Roger W.Moss, author of Historic Houses of Philadelphia

"If you want to get acquainted with Colonial Philadelphia, Boudreau has arranged an introduction... copiously illustrated and fascinating for all the contemporary sources it cities."-Philadelphia Inquirer

Founded in 1681, and grounded in enlightenment ideals, Philadelphia attracted diverse settlers form the Old and New Worlds. In its first century, Philadelphia assumed roles as a center of revolutionary protests, a meeting place for colonial delegates where both the Declaration of Independence and Constitution were written and signed, and, finally, the first capital of the United States of America. Richly Illustrated with new photography, maps, and an amazing array of early American art, Independence: A Guide to Historic Philadelphia reveals the stories of the persons who experienced the early years of the new nation. Based on meticulous research, Independence walks its readers through the lives of the residents and visitors of the revolutionary city, and through the streets and buildings that they knew. Famous names are here: Franklin, Jefferson, Adams, Washington. But Independence also focuses on the fascinating stories of less famous American founders. Enslaved and free, women and men, rich and poor, patriot and Troy, shaped Philadelphia's and America's experience in the Revolutionary era, and all have their say here. In addition, this guide tells the stories of the iconic buildings and streets where America was founded. The book explores the dozens of buildings that make up Independence National Historical Park and connects these with neighbouring sites that are also intimately associated with the story of American's birth. Independence will enrich the experience of those who travel to these historic sites, as well as offer a vivid and fascinating story for the general reader.

It's hard to strike the right balance in a book like this, and George Boudreau should be congratulated not only for doing that but for making it look easy. Sound history, written with clarity and grace, and blended with reliable information for the visitor -- this book is essential reading for anybody visiting Philadelphia or writing about its historic past.

George Boudreau "is" Philadelphia history. His love for the city, and his deep knowledge of it, shine in this wonderful new guide to the "cradle of liberty."

In the interest of full disclosure, one of the things that pleases me about this book is his liberal use of Judith Sargent Murray]] letters describing Philadelphia in 1790 (I transcribed and published these letters several years ago!). Judith was visiting Philadelphia from Massachusetts, and she was a professional essayist and keen observer who described "everything" in letters written to her parents back home (including Franklin's library, Peale's museum, July 4 celebration...). Her letters are a new eyewitness account of American history at a most pivotal time, and Boudreau is the first Philadelphia historian to include the letters in a book about Philadelphia.

So...Boudreau's wonderfully illustrated book is chock full of information you didn't know about Philadelphia, but you really should because, well, it's Philadelphia!!!!!

GEORGE W. BOUDREAU is a cultural historian of eighteenth-century America, specializing in the history of early Pennsylvania, the life of Benjamin Franklin, and material culture. An active public historian, he has worked with numerous historic sites in the Philadelphia region and was the founding editor of Early American Studies: An
Interdisciplinary Journal. He teaches history at Penn State Capital College and lives in Philadelphia.