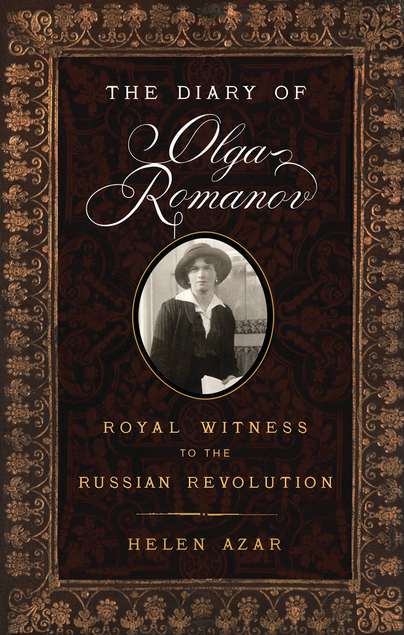 The Diary of Olga Romanov (Paperback)

Royal Witness to the Russian Revolution

Add to Basket
Add to Wishlist
You'll be £14.99 closer to your next £10.00 credit when you purchase The Diary of Olga Romanov. What's this?
+£4.50 UK Delivery or free UK delivery if order is over £35
(click here for international delivery rates)

In August 1914, Russia entered the First World War, and with it, the Imperial family of Tsar Nicholas II was thrust into a conflict from which they would not emerge. His eldest child, Olga Nikolaevna, great-granddaughter of Queen Victoria, had begun a diary in 1905 when she was 10 years old and kept writing her thoughts and impressions of day-to-day life as a Grand Duchess until abruptly ending her entries when her father abdicated his throne in March 1917. Held at the State Archives of the Russian Federation in Moscow, Olga's diaries during the wartime period have never been translated into English until this volume. At the outset of the war, Olga and her sister, Tatiana, worked as nurses in a military hospital along with their mother, Tsarina Alexandra. Olga's younger sisters, Maria and Anastasia, visited their own infirmaries to help raise the morale of the wounded and sick soldiers. The strain was indeed great as Olga records her impressions of tending to the officers who had been injured and maimed in the fighting on the Russian front. Concerns about her sickly brother, Aleksei abound, as well those for her father who is seen attempting to manage the ongoing war. Gregori Rasputin appears in entries, too, in an affectionate manner as one would expect of a family friend. While the diaries reflect the interests of a young woman, her tone increases in seriousness as the Russian army suffers setbacks, Rasputin is ultimately murdered, and a popular movement against her family begins to grow. At the point Olga ends her writing in 1917, the author continues the story by translating letters and impressions from family intimates, such as Anna Vyrubova, as well as the diary kept by Nicholas II himself. Finally, once the Imperial family has been put under house arrest by the revolutionaries, observations by Alexander Kerensky, head of the initial Provisional Government, are provided, these too in English translation for the first time. Olga would offer no further personal writings as she and the rest of her family were crowded into the basement of a house in the Urals and shot to death in July 1918.

The Diary of Olga Romanov: Royal Witness to the Russian Revolution, translated and introduced by scientist and librarian Helen Azar, and supplemented with additional primary source material, is a remarkable document of a young woman who did not choose to be part of a royal family and never exploited her own position, but lost her life simply because of what her family represented.