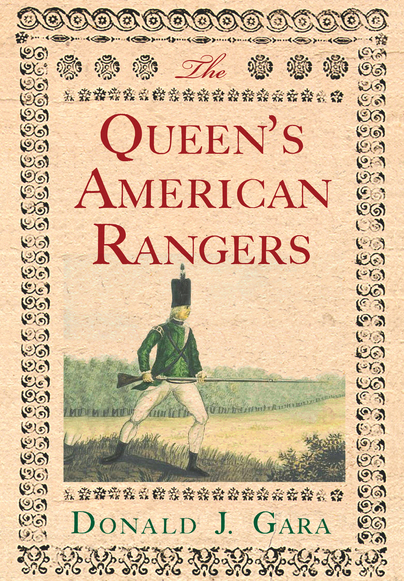 The Most Celebrated Loyalist Regiment of the American Revolution

Add to Basket
Add to Wishlist
You'll be £16.99 closer to your next £10.00 credit when you purchase The Queen’s American Rangers. What's this?
+£4.50 UK Delivery or free UK delivery if order is over £35
(click here for international delivery rates)

At the start of the American Revolution in 1775, Robert Rogers of French and Indian War fame quickly organized a regiment to fight the war—but not on the side of his native Massachusetts. Named in honor of Queen Charlotte, Roger’s regiment recruited Loyalists from New York, western Connecticut, and parts of Virginia. Rogers’s command of the unit was short-lived however, and after a humiliating
defeat in 1776, and under new leadership, the unit played a decisive role at the battle of Brandywine that brought them their first favorable attention from the British high command. With this performance, and under the able leadership of John Simcoe, the Queen’s American Rangers— sometimes known as “Simcoe’s Rangers”—were frequently assigned to serve alongside British regular troops in many battles, including Monmouth, Springfield, Charleston, and Yorktown.Receiving frequent high praise from Lieutenant General Sir Henry Clinton, the Commander in Chief of the British Army in America, the unit was placed on the American Establishment of the British Army in May 1779, a status conferred on provincial units that had performed valuable services during the war, and was renamed the 1st
American Regiment. Before the end of the war, the rangers were fully incorporated into the regular British Army, one of only two Loyalist units to be so honored.

The Queen’s American Rangers by historian Donald J. Gara is the first book-length account of this storied unit. Based on extensive primary source research, the book traces the complete movements, command changes, and battle performances of the rangers, from their first muster to their formal incorporation into the British Army and ultimate emigration to Canada on land grants conferred by a grateful British crown.

Gara has compiled a substantial amount of detailed information into a readable and informative narrative. His inclusion of several anecdotes, including an incident prior to the Battle of Monmouth Court House when Simcoe convinced unsuspecting local rebel inhabitants that he was “Captain” Light Horse Harry Lee, add to the book’s appeal. The Queen’s American Rangers is a comprehensive synthesis of multiple primary sources, a work suited for the serious student of Revolutionary War history and military tactics.

Donald J. Gara has provided a first-rate example of how to undertake such a study successfully with The Queen’s American Rangers, a history of one of the best known and most effective Loyalist regReaders interested in Loyalist military units in general or the Queen’s Rangers in particular will find this a valuable book, as will anyone with even a general interest in the American Revolution. Perhaps other writers will follow Gara’s lead and add their own histories of other units, American, British, and Loyalist, to expand our knowledge of the War for Independence.iments in the War for Independence.

Excellent account of the Queens American Rangers. Anyone with interest in the American Revolution will find this a valuable resource. It is extremely well written and engages your interest. I highly recommend it.

Readers interested in Loyalist military units in general or the Queen’s Rangers in particular will find this a valuable book, as will anyone with even a general interest in the American Revolution. Gara has written an engaging, informative history of the Queen's Rangers and provided the necessary context so that readers can follow the unit through its long and active service of raids and battles.

A most interesting reading on the American Revolution. Specifically the forming and tactics of the Queens (Rogers) American Rangers. How the British Army recruited and commissioned their officers a very interesting topic. Until now I never realized how many in North America remained loyal to the British Crown during the revolution. The book is well written, holds your attention and is fun to read. Goes well beyond and books or movies that I've seen to date. Clears up a lot of detail behind the scenes.