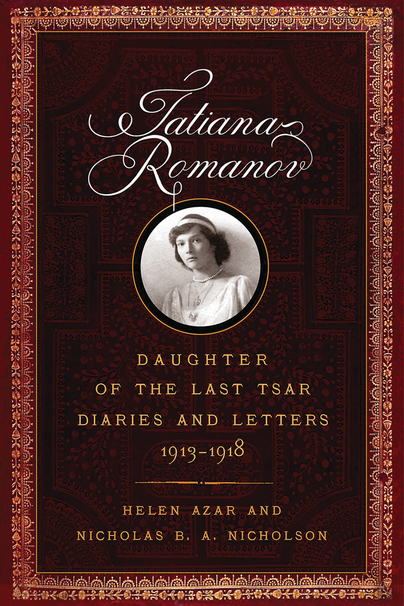 Add to Basket
Add to Wishlist
You'll be £19.99 closer to your next £10.00 credit when you purchase Tatiana Romanov, Daughter of the Last Tsar. What's this?
+£4.50 UK Delivery or free UK delivery if order is over £40
(click here for international delivery rates)

Grand Duchess Tatiana Nikolaevna of Russia was the second of the four daughters of Tsar Nicholas II and his wife, the Empress Alexandra Feodorovna. Long recognized by western historians as the undisputed “beauty” of the family, Tatiana was acknowledged for her poise, her elegance, and her innate dignity within her own family. Helen Azar, translator of the diaries of Olga Romanov, and Nicholas Nicholson, Russian Imperial historian, have joined together using previously unpublished Russian source materials to present a truly comprehensive picture of this extraordinarily gifted, complex, and intelligent Grand Duchess for the
first time, and in her own words. Using the letters and diaries of the Grand Duchess, Tatiana Romanov, Daughter of the Last Tsar: Diaries and Letters, 1913–1918,presents translations of material never before published in Russian or in English, as well as materials never published in their entirety in the West.

The brisk, modern prose of Tatiana’s diary entries reveals the character of a young woman who was far more than the sheltered imperial beauty as she has been portrayed by western writers. While many Western historians portray her as a cold, haughty, and distant aristocrat, this book reveals instead a remarkably down-to-earth and humorous young woman, full of life and compassion. A detail-oriented and observant participant in some of the most important historical events of the early twentiethth century, her first hand descriptions of the tercentenary celebrations of the House of Romanov, the early years of Russia’s involvement in World War I, and the road to her family’s final days in Siberian exile reveal extraordinary details previously unknown or unacknowledged by western historians. Lavishly annotated for the benefit of the non-specialist reader, this book is not only a reevaluation of this important figure’s role as more than just one of four sisters, this
book is also a valuable reference on Russia, the First World War, the Russian Revolution, and the people closest to the Grand Duchess and her family.

It was fascinating to read the daily correspondence of an actual princess/czarina, especially from Tatiana, who seems to be responsible, mothering, caring, grateful, and frequently asks after the welfare of others. Though her writing is interspersed with other documents and diaries of other dignitaries, you get the sense of her day to day appointments, small mercies and moments of great happiness, going to theatre, schooling, playtime, entertaining visitors and members of the military, illnesses, boating excursions, religious services, and her patients while working with the International Red Cross.

Recommend to anyone interested in the daughters of Nicholas II. This book gave insight into their private life like no biography can, in the words of the second daughter of the last Tsar of Russia, writing during WW1 and the Russian Revolution.

These books are such a blessing to anyone with serious interest in everyday life of the last Romanovs!

A full translation with contextual footnotes to ease understanding. This book gives a more complete picture of day-to-day life for a Romanov Grand Duchess in the last years of Imperial Russia. As it’s a translation of a diary it’s hard to find much else to say. I think it is a useful document for those studying the era, and helpfully annotated.

This book is a translation of diaries kept by Tatiana Romanov, the second child of Nicholas II and Alexandra. The entries begin on 1 January 1913 (when she was fifteen) and continue (with a few gaps) until October 1916 (when her father abdicated). Letters to and from Tatiana have also been included, some of which were copied into her diary, and which add coverage until May 1918. (The family was executed in July 1918.)

What adds extraordinary value to this translation is that extensive footnotes have been provided, explaining who most of the people are who are mentioned, and adding brief historical, cultural and religious notes.

The editors have also inserted occasional text from other memoirs, allowing the reader to see Tatiana from another perspective and to gain additional background information... Tatiana comes across as a very serious young woman who is conscious of her royal duties, with strong feelings toward her family members. I was amazed to see her transition, seemingly effortlessly, into her wartime role as nurse. The murder of such an innocent, virtuous young lady at the hands of the Bolsheviks is reprehensible.

Helen and Nicholas’s book goes a long way to filling in a huge nuber of gaps in our knowledge of the last days of the Romanov Empire before it was utterly destroyed by the Russian revolution of 1917. An intimate and fascinating insight into the lives of the Russian royal family as seen through the eyes of Tatiana Romanov. Superb.

The gallery of photos is a wonderful, interesting and truly crushing addition to the book. Showing the smiling happy duchesses and their family – all unaware of the horrible and awful fate that awaits them. It was a deep blow to put faces to the names and be hit with the deep sense of true loss and pain for what happened to Tatiana and her family. It’s very easy with history to lose touch with the fact that these people lived and breathed and had true and personal feelings. As an historian I find myself occasionally looking past the humanity of the figures I’m studying and think of them as characters rather than people… it’s good to be reminded through sources like this that that isn’t the case and these people lived and breathed, laughed and cried as we do.

HELEN AZAR is a librarian at the Free Library of Philadelphia. She has translated and published several books based on the writings of the members of the last Russian imperial family, including The Diary of Olga Romanov, also available from Westholme Publishing.

NICHOLAS B. A. NICHOLSON is a noted specialist in Russian fine and decorative arts. He has been an art advisor and researcher for private collectors, museums, and other institutions. An expert on the Russian Imperial Court, he publishes and lectures frequently on imperial topics.